Some familiar names appeared at the top of the list for the Thursday Open Pairs games. That Bob Lavin and Harold Feldheim won was no surprise, but isn’t 68.30 percent for a two-session game a little ridiculous? The names that attracted my attention, however, were the second-place pair of Denyse Le Maire and Carol Foley of New Jersey. I had met these two ladies on Wednesday evening at the pairs game in Simsbury, CT. The regulars were delighted to see them because their appearance eliminated the need for a sit-out. The ladies informed us that they were staying overnight in Enfield, the town in which I live. I volunteered to show them a slightly faster way to get there, and they followed me home.

It was easy to remember them: Denyse for the spelling of her first name and Carol for her diminutive height – she brought a box on which to put her feet when she was seated. I wonder if she did this in Mansfield. Did anyone notice? 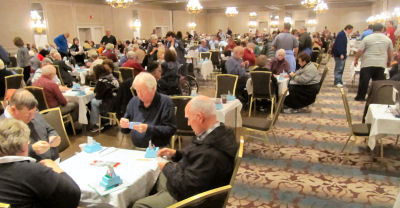 The irrepressible Luigi Montefusco (far right) made it to Mansfield for the tournament. What is your excuse?

The pair was on vacation, and they said that they were playing bridge on the way up to Maine. Maybe someone can figure out a way to string together a set of club games, sectionals, and regionals to make a marketable tour package. If these two found Maine an attractive destination in November, surely others would enjoy New England during the months in which our weather is unbeatable.

As usual I was not able to participate until Friday evening. In this case my tournament began with the website committee meeting at 6:00 followed by the Side Game at 7:30 with a guy from the Cape named Greg Winkler. My only correspondence with him had been a few e-mails, and I hoped to have enough time to go over our card thoroughly before the Side Game. However, Greg did not show up until 7:27, so we had to manage by the seat of our pants, which was enough to produce a 54 percent game.

Where else could you take a quick dip during the hospitality break? Those lights on the other side of the pool are in rooms that were used in many of the pairs games.

It turned out that I had already met Greg, who is from Australia and now teaches history at the high school level. We had played against one another in a three-way in Cromwell. In that tournament he was playing with one of my former partners.

Greg and I were certainly a contrast in styles. He excels at playing the cards. His approach to bidding, however, is much less structured than mine. If I am healthy, rested, and motivated, my play of the cards might rise to average for a B player. Bidding is my forte, and that is why I like the team games, which, in my opinion reward good bidding better than the pairs games. Our personalities were also poles apart. Greg is definitely a people person, a moniker that no one has ever applied to me.

The favorable result in the Side Game made me think that we might fare well enough in the team games on Saturday and Sunday, in which we were joined by two long-time friends from Rhode Island, Marcia West and Paula Najarian. One of my worries was that my performance might be adversely affected by fatigue. I had not gotten much sleep all week, and I had meetings scheduled before each of the morning matches. 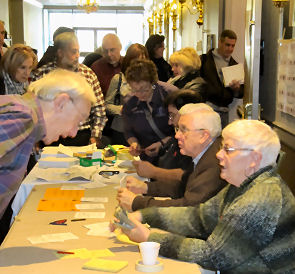 I woke up early Friday morning. My intent was to drive to the Café on the Common, which reportedly offered the best breakfast in Mansfield. I got directions from Mapquest and headed to my car, which was covered with a thick coating of frost. When I got inside, I could not find the directions that I had transcribed. I convinced myself that my internal GPS would suffice, but in fact I must have made a wrong turn, and I ended up in Attleboro. I purchased my usual sausage biscuit with egg at the McDonald’s there and returned to the hotel. Incidentally, the road from Mansfield to Attleboro must be one of the longest residential roads in New England that does not have even one stop sign or traffic signal.

We prevailed in our first Compact Knockout match over a very good team. In the second round, which was a three-way, we won one match and lost one (to the eventual winners). Unfortunately we lost by a little more than we won, and we were eliminated. Each of us could probably have prevented that debacle, but my mind focused on the first hand of the match that we won. Here was the bidding:

I could hardly believe it when Greg lay down three diamonds. I (too) rapidly assessed the situation and determined that I should in any case be able to manage seven tricks with diamonds trump. Slam seemed inevitable for them if anything else were trump. So, I set my goal as the attainment of eight tricks, and I looked forward to a big swing. What I did not do was pay enough attention to the spade suit. Greg had three to the jack, and I had ten-third. However, on the second round of spades, the opponents managed to crash their spade honors while my attention was engrossed in a proof of Fermat’s Last Theorem that I had been working on. So, I neglected to use the ♠J as an entry to the board, and I therefore blew an opportunity to score a game on a hand with pitiful values. We did get a big swing, but if I had made that ninth trick, we would have made it to the semifinals.

I had no time even to skim the two books by David Bird and Taf Anthias that I bought.

I pose these questions for the Cape Cod foursome of Barbara Perkins, Mercedes Riley, Sheila Middleton, and Karen Largay. You won four matches on Saturday and only lost one: Why did you have to lose the one match that would keep us from making the semifinals? Could you not at least have kept it close?

The afternoon was a catastrophe. Whatever adrenalin had kept me going in the morning dissipated at lunch. I had no concentration in the Red Point Swiss session at all. I even accidentally trumped one of Greg’s tricks. From my point of view the highlight, if that is the word, was the last match in which we faced the other 0-3 team. On the second board Greg opened 3♠ vulnerable. I was looking at 0=4=5=4 distribution with one queen. I passed and then saw the red card on my left followed by two passes. I gulped and also passed. Greg soldiered on, but he could manage only five tricks, and we had to write sticks and wheels in the right hand column. 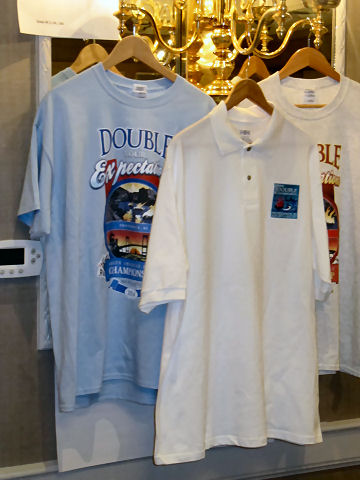 Joe Brouillard served as both salesman and model for the tee shirts and polo shirts promoting next fall's NABC event in Providence. I bought two. If you want one, you can contact him at Joe@JoeBrouillard.com.

The last hand of the match provided me with the opportunity to make a first-hand determination of the age-old question: “Which is the worst feeling in bridge: when your partner preempts in your void, or when your partner misses a splinter?” We only went down one this time, but 4♥ was cold. One great thing about team games is that sometimes you can fall flat on your face, and your teammates set you aright. That happened in this match. Paula and Marcia also recorded 1100 on the preempt hand, and their performance on the other four boards made up for our screw-up on the splinter hand. We actually won that match.

A similar thing happened in one of the matches in the Round Robin on Sunday. On the first hand we had a bidding mix-up that got us to an impossible 4♠ contract. I then made things worse by revoking near the end, and so we ended up with -400. On the next hand I choked again on a difficult but makable 3♠ contract. This time I missed a discard by LHO in the diamond suit. Once again Greg and I sheepishly brought our scorecards back, and once again the ladies bailed us out. They somehow made 4♥ to more than offset the -400, and they defended expertly to defeat 3♠.

In the end we finished second in our bracket. Since we were seeded #7, we were all pretty satisfied with that outcome. Greg was probably the happiest with the weekend’s results. While I was examining the reverse side of my eyelids on Saturday evening, he had played with Marcia in the Side Game and earned much more than the fraction of a gold point that he needed for Life Master. The 5.25 that we earned on Sunday was just gravy. 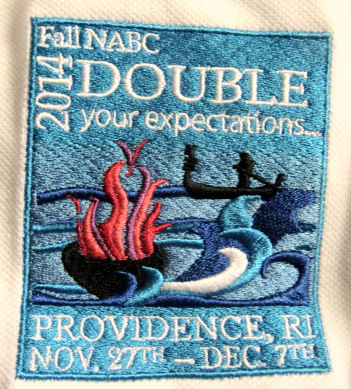 I will pass over without mentioning here our experience in the hotel's restaurant on Friday evening, but I might go into details on Yelp or TripAdviser.

I have no complaints about the drive; I experienced no problems in either direction. However, if the jeep and the eighteen-wheeler that collided on I-91 in Longmeadow Sunday evening had been headed south instead of north, I would definitely have arrived home several hours later.

I won’t be in Phoenix, but I would love to receive comments or photos from anyone with a view from B low who makes the trip. Send them to webmaster@NEBridge.org.

The logo for the Providence NABC is definitely hot. Or cool. Or maybe both!