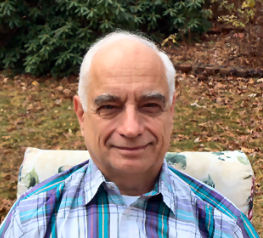 Success at declarer play depends greatly on both one’s short-term and long-term memory. Short-term memory is essential for recalling which cards have already been played during a hand, or how many trumps are still out. Long-term memory is needed for remembering how to handle complex cases that recur infrequently. On today’s hand, South succeeded because he remembered reading about the critical card combination in a bridge article some two years previous.

West’s 3♥ call was a pre-emptive raise, showing typically four-card support and fewer than six high-card points. South’s double was primarily for takeout, showing a willingness to play other suits, but also promising extra values and defense in case his partner chose to convert the double to penalties. With fair values herself, North decided to jump to 4♠, but retreated to 5♦ when West doubled, fearful that there might be a bad split with her anemic suit.

South ruffed the heart lead, played a diamond to dummy’s king and a diamond back. When the queen appeared, he took the ace and drew a third round of trumps. Since there was a sure spade loser, South’s problem was to avoid losing two club tricks with the following combination:

Prospects did not appear good. The normal play in clubs is to play ace and low toward the queen, hoping for the king to be on the left. That was unlikely for two reasons: East had opened the bidding and was more likely to have the missing high cards, and West, who probably had a few points in the spade suit for his double, denied having many high-card points for his preemptive raise.

Another possibility might be to hope that East held K-x doubleton and duck the second club altogether, letting the king beat air. South was pretty sure that was not going to work, however, because he had an inferential count on the opponents’ hands. If West had four hearts, then East had six. East probably held at most two spades (remember West’s double), and, with only two diamonds, figured to have at least three clubs.

Of course West might have a lucky J-10 doubleton of clubs, a real long shot. But South remembered learning a play called the “intra-finesse”, which allowed for the much more reasonable chance of West holding either J-x or 10-x of clubs.

Declarer started clubs with a low one from his hand, and when West followed low, he put in dummy’s 9. East won the jack and got out with a heart. South ruffed, led a spade to dummy’s king, and played the queen of clubs, pinning West’s 10. East could cover or not; it didn’t matter. South managed to lose only one club and made his contract.

It would not have helped if West had played his 10 on the first club lead. In that event, declarer would cover with the queen, lose to the king, and would have a simple finessing position against East’s jack. That would also work if West had started with a singleton 10 or jack.

Store this combination in your long-term memory. It may prove to be useful one day. And also remember not to follow West’s example: if you think the opponents are in a troubled contract, don’t double unless you can also do the same when they run to a different one.