The weather on Friday was indeed wintry, but it was not that bad, at least not in north-central Connecticut. It took me and my Poulan less than a half hour to throw the five or so inches of snow off of the driveway and sidewalks. Early that morning I received an e-mail from Helen Pawlowski that the schedule for games in Newton would not be affected by the weather. I immediately posted this on the website and informed my partner, who would be driving up from the cape, that I was definitely planning on attending the Friday evening session. 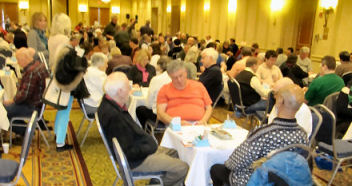 The drive was surprisingly uneventful; in fact I made record time. There was little traffic, and the roads were just wet. It might have helped that the sun was out. Some of that water on the roads might have turned to ice shortly after sunset.

I learned from an e-mail from Bob Bertoni that the Website Committee was meeting at 6:30 and that there would be sandwiches (actually wraps). The meeting was interesting, but the turkey wrap that I consumed demanded to return to the surface at about 2:00 the next morning. 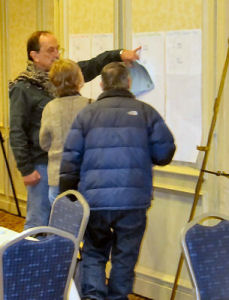 They clobbered us in the three-way.

My partner, Greg Winkler, made his appearance nearly four minutes before the deadline for entries. I have it on good authority that that is very early for him. We were playing in the Flight B Knockout, and we were lucky enough to draw a three-way. We got smoked by Barry Herring’s team, but our other match was very competitive from the beginning. We had a four-point lead at the break, but our opponents won the second half by the same margin. David Metcalf told us to hold a four-hand playoff. We lost on the last hand when our least experienced team member corrected her partner’s proposed 3NT contract to a Moysian 4♠. Unfortunately, nine tricks were available in both contracts, as well as the 3♦ contract in which the opponents played at our table. We had played our hearts out for four hours and had absolutely nothing to show for it. Oh, well, we could at least play in the consolation event on Saturday. 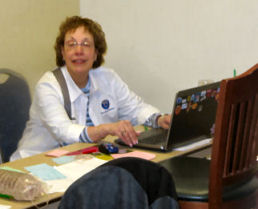 Marilyn was locked up in the Cloak Room working on the results.

I returned to room 324 with the intention of posting the day’s results, which I receive by e-mail from the directors. I was pleasantly surprised to find the evening results already in my in-box, but I could not locate the afternoon results. I went up to the fourth floor to see if I could ask Marilyn Wells about the afternoon results in person. I found her just as she was getting on the elevator. She said that she would send them to me again. I received the forwarded copy just before the original finally showed up. Does anyone understand how e-mail works?

I slept fitfully for an hour or two, after which I made the unexpected dash to the bathroom. I then collapsed on the bed until my wakeup call came at 4 a.m. It was all that I could do to drag my sorry carcass from under the covers. Nevertheless, I intended to win the ice-fishing contest, and I had already invested almost $2,000 at Cabela’s for just that purpose. I dressed in layers, donning my parka and my ice-chaps last. I then walked out to my Silverado in the bitter cold. It would not be a great deal of fun to manhaul my gear out onto the frozen Charles River, but at least there would certainly be ice.

Never say anything bad about my truck.

My plan was to meet Eb Constable, a tenth-generation New Englander with flinty features who knew every nook and cranny of the river. He was already at the parking lot, and it was hard to believe that someone could generate so much enthusiasm at that hour in those conditions. “Are you ever in luck,” he said. “Someone spotted Sir Isaac yesterday, and I know just the place for you to set up your rig to get him. What’s more, I know what he prefers for breakfast!” 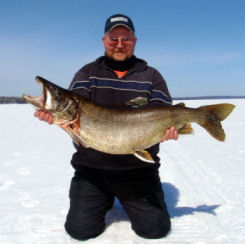 Sir Isaac was bigger. Much bigger.

Sir Isaac, I learned from my guide, was the legendary monstrous northern pike of the Newton area. Eb provided me with a permit and bait and then showed me where to set my tip-ups in Maple Cove. It was hard work, but my gas-powered auger had produced a dozen ten-inch holes by the time that the sun came up. At least the exertion kept me a little warmer.

The consolation round was scheduled to start at 9, which meant that I would have to leave at 8 or so. I was beginning to despair when I got a strike, and what a strike it was. I fought the beast for fifteen minutes before his massive snout finally broke the surface. Even at that point he was all that I could handle. Perhaps the greatest moment of my life was when I dragged him into the shelter. At that point, however, there was no time to pack up. I left all of my gear just as it was, shuffled across the ice to my trusty Silverado, fired up the V8, and then sped back to the Marriott. My teammates had already bought the entry.

"And a do-si-do." Organized chaos preceded each new round of the individual.

We were in another three-way, and this time there was no stopping us. We won both matches and advanced to the semifinals, where we were to engage in our first head-to-head match. At lunch I told my teammates how I had heroically landed Sir Isaac. I am sure that they were impressed, but mostly they talked about the morning's hands. Unfortunately, the break was barely long enough for us to grab a bite to eat. There was no time to return to the river to show everyone my prize catch. 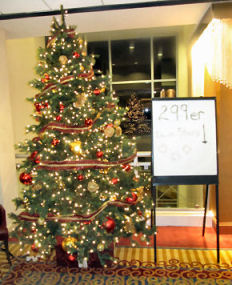 It was still the Christmas season for the INCrowd.

The afternoon session was a doozy. In the first half Greg and I played as well as we possibly could. On the last deal I tried 4♥ on a hand that was played by our teammates in 1NT (making). Our opponents doubled us, but the defenders did not find the killing spade lead, and I brought the contract home with a massive crossruff. We led at the half by thirty-one points.

The second half, from my perspective, was uneventful. I did not play any hands, there did not seem to be any swing hands, and on the very last deal we set 3NT by four tricks. Maybe we should have doubled, but how could we anticipate that the declarer would discard his ace, king, and queen of clubs on the tenth, eleventh, and twelfth tricks? However, when we compared results, we found that the opponents got the better of us on a few partials, on one hand they bid and made a spade game when Greg only manage nine tricks, and then there was hand #3. Greg opened 2NT. I held something like the following:

It seemed like an obvious 3NT response. I tried to picture a hand that Greg might have on which slam was possible, but I could not imagine one. After all, the opponents held at least ten points. They might be able to take quite a few tricks.

At the other table they bid and made 6NT. Our teammates insisted that it was cold. When we told them that Greg, who is quite adept at playing the cards, only made five, they pulled out the cards for the hand. The defender who was on lead, with at least twenty points on his right, led ♦K from something like this assortment:

Declarer can see ten tricks outside of diamonds. The only way to make the slam is to get two diamond tricks, which is impossible if any suit besides diamonds is led. At any rate, our opponents made the slam and won the second half by four lousy points. 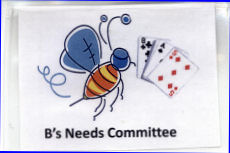 People who wear badges like these are working to make the tournament experience more enjoyable for everyone (except for the A players, who already enjoy themselves).

I remembered reading about this kind of situation in the Winning Notrump Leads book by David Bird and Taf Anthias. The authors discuss on p. 186 leading from a similar holding against a 1NT -  6NT sequence. The diamond lead is the worst possible lead in a team game, but it is not bad in a pairs game because it decreases the likelihood of the overtrick. With a 2NT bid on the right, it seems clear that the diamond lead becomes even less attractive.

At the end of the game I could hardly keep my eyes open. I congratulated our opponents, and the four of us decided to call it a day. I took a nap and then got some soup (good) and salad (bad) at the hotel’s restaurant. I then went back to my room, posted the day’s results, and then entered the Land of Nod. The wakeup call came at 4 a.m. again. Oh, no! I had gotten so involved in the bridge that I had completely forgotten about the fishing camp. I rushed out to the Silverado. 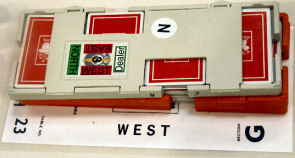 You do not often see this mat!

I was surprised to find that the weather had turned pleasantly warm. Well, warm enough for winter in New England. I drove the Silverado back to Maple Cove, and I found … water. No ice to speak of, no shelter, no equipment, no Sir Isaac, no holes. Or rather nothing but holes. I was crestfallen and exasperated, but there was nothing that I could do. I drove into Newton to get a breakfast sandwich, after which I met with the B’s Needs Committee and kept on my brave face. I don't think that anyone even suspected the depth of my heartbreak.

I played in the Open Pairs with one of my former-partners. I later learned that he was so tired that he had almost fallen asleep at the wheel while driving up from Connecticut. We both played badly, and our results were predictable. Nevertheless, sitting South, I had one shining moment on hand #5 of the morning session. 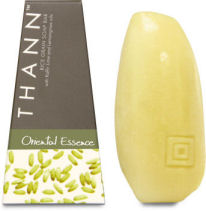 This Thai soap that the Marriott supplied in every bathroom retails for $9 per bar!

Frankly, I think that my partner's 4♥ bid was a little timid. I would have bid 3♠. However, I am glad that he did not do that; we probably would have ended up in 7♥, which has fewer options.

The lead was the ♥9. If I had played the ten, I could have claimed, but I went up with the ace. I then led out the diamonds and clubs before playing the ♥K. At that point it was pretty obvious that East had the ♠Q. I finessed and claimed.

Only one other team out of 23 bid and made 7NT, and they won the event!