District 25's new Director, Mark Aquino is continuing the practice of sending out congratulatory e-mails to New England bridge players who have advanced in rank during the previous month. Some of them respond, and Mark will selects a few of the most interesting ones to be posted on NEBridge.org. Below is a memorable one from January of 2016. 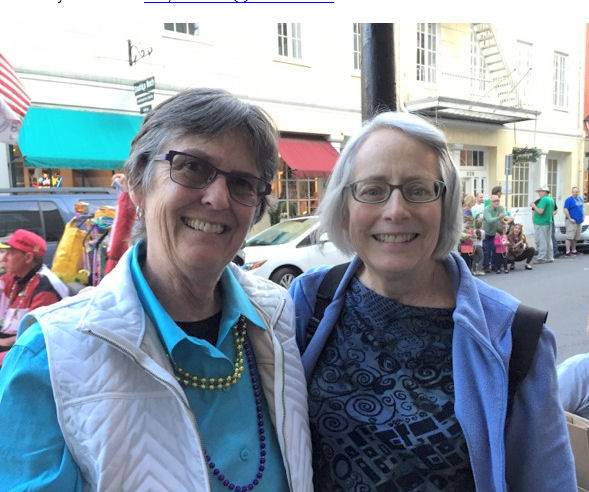 Deborah Drysdale and Lucy Crichton in New Orleans. Lucy is the one with no beads.

In March, 2013 I visited Deborah, my best friend from 5th grade, in San Francisco. She had recently taken up bridge again, and I went with her to her Monday night game in a large church in the Castro District. There were over a hundred people gathering at the tables on the floor of the hall, and on the stage there were thirty or more people who were present for a lesson. I attended the lesson and was encouraged to play.

The story of bridge with Deborah began in the 1950’s at her grandmother’s farm in Virginia. We would play bridge in the evening with her grandmother who very patiently taught three teenagers.

In August of the year when I picked up the cards again, Deborah invited me to accompany her on a cruise to Alaska. We had the wonderful experience of learning from Audrey Grant. By then, I was just beginning to see how many complex layers there are to the game, and to glimpse its challenges. I began to understand why people are drawn to the game of bridge.

When I first arrived home from California, I looked for a game close to home, and found the club in Bow, NH. I was welcomed by the director, Joan Cook, and her able assistant, her husband John. Since that spring, I have continued to play mainly at Bow. I cannot say enough about the Bow Club. There is intense, but friendly competition. It is an open game, so right away a beginner plays against experts. I have come to like and respect the people who play there regularly.

I began taking lessons, wanting to learn more. I have attended Rick Weinstein’s class in Manchester for the past three years, and have also been taking lessons with him with three friends in Concord. Joan Cook has also been a teacher to me, and continues to inspire. Both of these teachers have a love of bridge and are willing to help others learn the game. Hearty thanks to both!

In the last couple of years I have attended two national tournaments and two regionals. I know there is so much more to learn!

A word about John Cook: He always had a twinkle in his eye, did not take bridge too seriously toward the end of his life, but played for fun. He had a kind spirit, and was a welcoming presence in Bow. I miss his warm smile and big heart.

As far as I am concerned, District 25 is doing fine. I do wonder if young people are learning bridge. Thanks for asking.