At the beginning of every month District 25's Director, Mark Aquino, sends out congratulatory e-mails to New England bridge players who have advanced in rank during the previous month. Some of them respond, and Mark selects a few of the most interesting ones to be posted on NEBridge.org. Below are a few memorable ones from January of 2016. 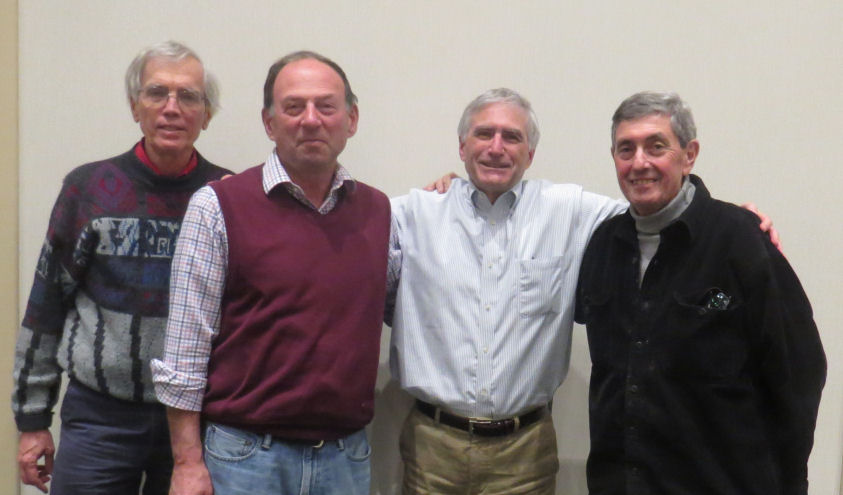 Dave Landberg, who is much older than he looks, is on the far right. This is the team that finished 8-0 in the 0-1500 Swiss in Cromwell.

Thank you, Mark! I hope to gain more points this week in Cromwell.

Regarding reaching this milestone – in my mind it’s pretty straightforward. Read, listen, take advantage of learning opportunities, but most importantly play with partners who are willing to engage not just in playing but discussing and delving into the nuances of the game.

Regarding District 25, I’m really excited by the improvements in communications – tournament results, emails from Mike Wavada, etc. The more the better! While I’m sure that there is regular District-Wide discussion, I think it would be helpful to identify priorities and learn from one another’s successes and failures. I served on an HBC Marketing Committee last year, and while we are very proud of making substantial progress, we didn’t get to possible initiatives such as web development and promoting games for players who are still engaged it their working careers. A district-wide focus would no doubt be helpful.

As I mentioned, I’m a proud member of the Hartford Bridge Club. Donna Feir, the directors and instructors, and the Board have done a magnificent job – most of us simply love the club. 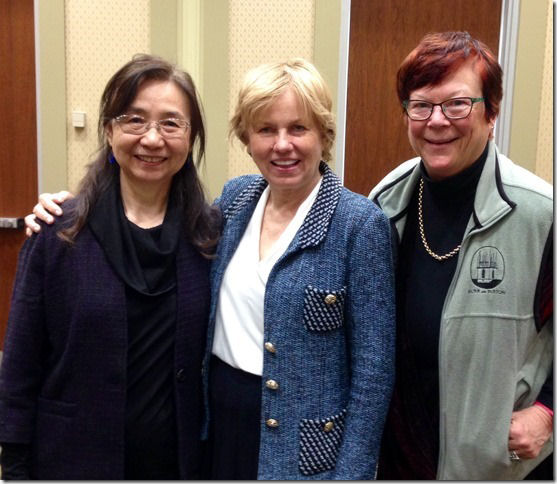 Yan is on the left. This photo was taken at the NABC in Providence in 2014.

What a pleasure to have received your letter about the club master status on Feb 7, 2016!

My father loved playing rubber-bridge, and he introduced the game to me and my brothers. Growing up in China it was one of the fun things we did together as a family. With my mother the five of us rotated to play at the table. I did not understand much about conventions or scoring, but my father installed in me some card sense and manners at the table.

The good family days ended with constant political turmoil in China in the 60s and 70s. I lost my mother in 1978, my father was locked up and we were sent far away for “re-education” during the “Culture Revolution”. We were never able to play bridge at home again. I came to the U.S. in 1980. Between studying, getting a job and getting married there was no time to think about bridge until 1990. I took a crash course in Tucson, AZ where I lived – it was once a week for four weeks. I bought a couple of bridge books from a used book store and intended to learn. I even started a lunch bridge club at my work place. That adventure was short lived because of job changes and to be honest, we did not have a clue what we were were doing.

Fast forward to moving to the pioneer valley of western Mass 10 years ago. We met a couple who were interested in playing bridge. We got together on weekends alternating cooking dinner and then playing a few hands of bridge. This social event lasted a year.  In fall of 2014 I met a neighbor who was looking for a bridge partner. My husband volunteered me for the challenge. I did not want to do it at first afraid that once I started I’d be obsessed. But they both insisted. My neighbor introduced me to her teachers. The lessons were already covering intermediate conventions so I tried my best to keep up. My teacher Paul Bacon was very encouraging. He kept telling me that he expected great things from me.  In October 2014 I played my very first game at the Northampton bridge club. To my surprise we were third from the bottom, not dead last as I thought it would be. Then we went to Providence for a day and thrilled to get some points there. In the winter of 2014 I played with different partners from the club, and learned a lot from each person who was gracious enough to play with me.

On April 7, 2015, I received a letter from Rich DeMartino, who informed me of my junior master status. The person I most wanted to tell this news to was my father, who unfortunately passed away in 2009. I would pay anything to play with him again! My husband occasionally regrets his decision to sign me up because he thinks that I now spend more time on bridge than with him. But after reading the letters he shared my joy and was proud of me.

I hope our Northampton club can continue to grow and someday will be able to install the necessary equipment and software so that we can review our hands played as I found that is tremendous help for a beginner like me. If the ACBL and the district can lend some help toward that goal it would be great. 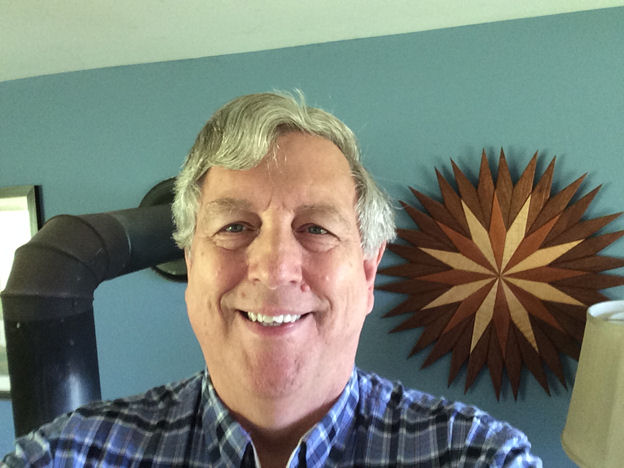 Steve won the Mini-McKenney for all of New England in his class.

I learned bridge as a kid when my parents had one to four tables of bridge at a monthly social get-together. I would kibitz/pester them for over an hour until sent away. I played occasional social bridge through my married years, raising four kids. After retirement  and divorce, I joined the ACBL for stimulation and fun in November 2014. I was bit hard by the Bridge Bug about eight months later, and I have been hooked ever since. Bridge has given me a half dozen groups of friends to socialize with and compete against. It has given me a challenge for continued growth, incorporating new skills and knowledge, goals to strive towards, some strokes, and lots of fun.