Since April my eyes have been bothering me a bit, but the earliest that my  optometrist could see me was June 21. This appointment, at which my prescription was weakened for the fourth consecutive time, kept me from attending the first day of the Summer Regional in Nashua. 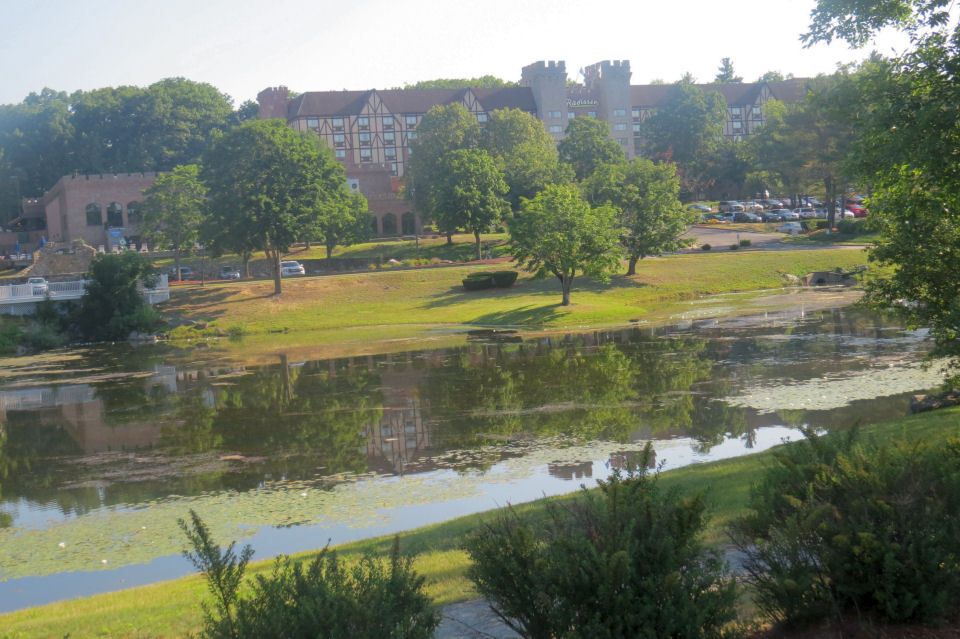 At what other tournament can you take a couple of laps around a pond that has real lily pads complete with frogs?

My goal for this tournament was unusual. I started the tournament with approximately 1482 points. I had firm commitments to play in two events with masterpoint limits of 1500 at the NABC in Washington in July. So, I wanted to do well, but if I earned as many as eighteen points, my plans for DC would need to be changed dramatically.

Sue and her partner, Judy Cavagnaro, drove up to Nashua to play in the Choice Pairs on Tuesday. I had to fight the rush-hour traffic on Wednesday morning. The right lane on the Mass Pike at exit 11A (I-495) was over a mile long and was scarcely moving. There were also puzzling delays on I-495 itself that had no apparent cause. Nevertheless, I had left early enough that I made it to the hotel in plenty of time for the 10:00 game.

My partner for the first three days was Ann Hudson, and our teammates in Wednesday's Open Swiss were Sarah Widhu and Lucy Hulse. I confess that I was not ready to play. We lost the first round, but my involvement was minimal. In the second round, however, I declared the first hand in a game contract, and I made a foolish play that caused the contract to fail. I was pretty certain that the declarer at the other table would find the correct line. Moreover, on the second hand I made a defensive miscue that allowed the declarer to make a game contract that we should have set. So, I was responsible for two game swings in a six-board match.Ouch.

Our 0-2 record dropped us into the three-way. I was taken aback when I found the assigned table out in the hinterlands because both of our opponents were really good teams. Somehow, however, we managed to win both matches, and we found ourselves right in the middle at the lunch break. In fact, we were 4-3 going into the last round, which was decided by this hand: The three-flighted Swiss on Thursday attracted eighty-two tables of players!

I gave considerable thought to opening the West hand with 2NT. However, I did not like the idea of doing so with two doubletons.  If the defenders start with a spade, and one of the kings is off-side, we probably would be sunk. If my partner had a good hand, we might be able to find a slam in a minor if we had enough bidding space. The downside of my choice of 1♣ was that when East bid 4♦, I had no idea how strong her hand was. On the other hand, it could have been worse; I was very afraid that she would bid hearts. In the end, I decided to pass. She could, after all, have a bust. When North did not lead his ♠A, I scored all thirteen tricks.

At the other table West opened 2NT, and Lucy decided, quite reasonably, that she did not have enough to overcall 3♠ vulnerable. Almost every B player has experienced the "2, 5, 8, 11, ..." chant from gleeful opponents; no one wants to repeat it. In any event, East raised to 3NT, and we lost the match. If Lucy had decided to risk 3♠, would the opponents have run to a minor? Who can say? At any rate we ended up 4-4, right in the middle. Our opponents in the last match finished first in the C flight. The event was easily won by Lew Gamerman’s team, the only A team in the event. The same foursome had won the Swiss on Tuesday, so I got to use one photo to cover two events on the Winners Board.

Supper at Carrabbas Wednesday evening was quite filling. I felt no need for a big breakfast on Thursday morning. I ate some canned peaches that Sue had brought from home and a couple of slices of the fruit-flavored bread that served as the district’s "hospitality."

Our teammates in Thursday's Mid-Flight Swiss were Bob and Shirley Derrah, and we played much better than on Wednesday. We only won four matches, but by the last match we had amassed enough victory points to face the team from the Boston area that won the event. On the very last hand I made an impossible 4♠ contract, but it was not enough. Ann and I had stopped at 2NT on a hand that our counterparts made a very thin game, and we failed to set a 4♠ contract that our teammates could not bring home. We ended up tied for sixth with everyone and his uncle. 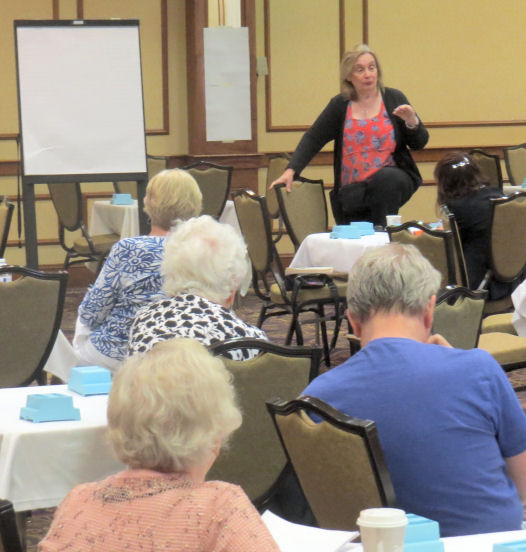 Sue decided to play in Thursday’s evening game. I had no interest in that and ended up eating by myself at the Mexican restaurant on the Daniel Webster highway. La Hacienda del Rio was clearly understaffed, but the waitresses heroically provided pretty good service by literally sprinting from table to table. I liked the tacos, too.

The same foursome played in the Open Swiss on Friday. Ann had a bad day, but let the record show that we did not finish last. We were in contention for that (dis)honor right up to the last round, which we won in a walk. The winner of the event, by the way, was Lew Gamerman’s five-player team. Lew’s team also won on Thursday.

The best thing about Friday was supper. We found a cool little restaurant called Pig Tale. They had very high ratings on Yelp for their fresh food and local beers. Judy, Sue, and I shared a couple of pizzas and a salad. We had a very good time.

Memo to self: Make a new restaurant map for next year. The hotel’s map is horrendously inaccurate.

Saturday for me was meeting day and pairs day. The Communications Committee had a (continental) breakfast meeting, and the Executive Committee met at supper. My regular Wednesday night partner, Ken Leopold, came up to play with me for the tournament's last two days.

Our morning game was dismal. The most frustrating moments came on this board in which I sat East:

I was in a quandary. When the opponents bid and raise a suit, we play OBAR BIDS. With ten or so points and no dominant suit I would ordinarily double any raise of a major suit to indicate support for anything partner could bid. If I passed, I was supremely confident that Ken would bid or double for takeout. In this case, however, we play “systems on” after a 1NT overcall. After interference we play lebensohl with penalty doubles. I wanted to double for takeout, but it took me a while to realize that I could not do so with our methods. I also could not bid Stayman without forcing partner to 3NT if he did not have four spades. In fact, the only systemic bid I could make was pass. The easy solution to this problem, of course, is to play negative doubles after 1NT overcalls, but that was not our agreement at the time.

At any rate, after we set 3♥ two tricks, the opponents called the director, who felt that Ken had taken advantage of my hesitation. Ken tried to persuade him that we never allow opponents to play in a major suit after a bid-and-raise auction, but it was to no avail. I apologized to him for causing the situation, but he was more upset than I have ever seen him.

Our afternoon session was much better, but it too involved a disputed director call. 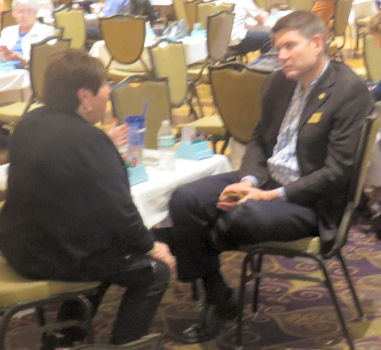 Robert Hartman, CEO of the ACBL, took time to talk with players on Saturday. Charlotte Bailey took advantage of the opportunity.

This time I was North. Before leading I asked the declarer about the 3♥ bid. She said that it was NOT fourth-suit forcing because the 2♣ bid was a game force. I then asked if it showed something in hearts. She giggled a little and said “I sure hope so.” Her partner remained silent until the end of the play, at which point he told her that the 3♥ bid was asking for a stopper in hearts.  I called the director and opined that we were given misleading information, and the dummy was obliged to correct this. To me this case seemed similar to the famous case in the finals of the 2013 Vanderbilt, which is described here.

Once again we lost. This time the same director ruled that using the fourth suit as a temporizing bid in this situation was “basic bridge.” It seemed strange to us that he would think that it was more basic than not allowing opponents to bid and raise a major suit unimpeded in a pairs game. Moreover, he never addressed the questions of whether dummy was required to correct declarer’s statement or the propriety of the declarer’s bizarre statement when holding A-Q-10 of the suit in question.

Ken and I both played well, and we ended up with a 58% game, not good enough to get into the overalls. I think that we would have just made it if we had won both director decisions.

At the Executive Committee meeting Helen Pawlowski announced that attendance at the tournament was up over one hundred tables after five days! I got a chance to explain why I thought that the ACBL’s free emailing service was inadequate to the plans of the Communications Committee for sending carefully targeted and crafted emails. In the end everyone agreed with Bob Bertoni’s suggestion to commit $2500 to MailChimp so that the charge per email could be reduced by 87.5%. It passed unanimously. Emails will now cost us $.00125 each. For that we get a lot of security, tools, and reporting. 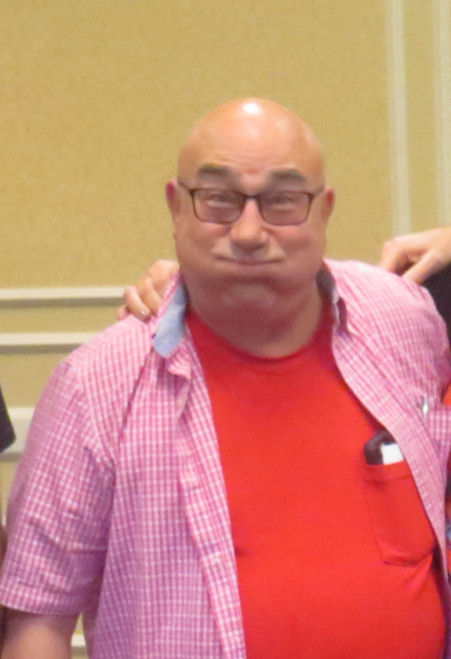 Lew Gamerman was evidently carrying victories in his cheeks chipmunk-style.

On Sunday our entire Swiss team (Sue, Judy, Ken, and me) attended the Board of Delegates breakfast. I was surprised to hear that eliminating the Bulletin at regional tournaments was under consideration. Apparently they cost $1.40 each, and their utility is in question. If you think that the Bulletins are still valuable in the age of electronic information, you should definitely contact someone from your unit. The delegates for each unit can be found here.

My final appearance in the 0-1500 Swiss on Sunday was of a piece with the rest of the tournament. We finished 4-4 with a victory point total that was a little above average. I won’t bother telling you about the hand in which Sue went down four in 7NT (undoubled!), or the one in which I expressed surprise that she went down one in 4♠, and she explained that they played in 2♣ in a five-card fit.

The important thing is that I succeeded in my main goal, which was to avoid winning eighteen masterpoints. Others were not so fortunate. I learned on Monday that Lew Gamerman, in addition to his four Swiss victories, also played on the team that won the Open Knockout, which started on Friday evening and ended on Sunday. He was a perfect five-for-five, playing only in top-level team events. As far as I know, this feat is completely unprecedented.