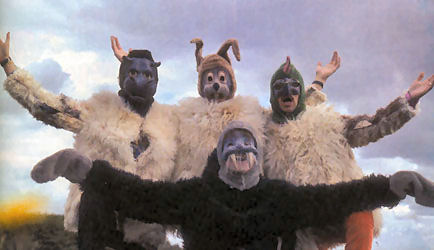 I think of District 25's tournament in Mansfield, MA, as the Magical Mystery Tournament. It is always the last tournament of the year. For some reason it only lasts for five days, and it has always been without a comprehensible theme. Prior to this year it was known as the Masters Regional or, sometimes, as the Master's Regional. I have never met anyone who knew who the “masters” were or why the district named a bridge tournament after them. One thing is certain: the winners never received green jackets.

In 2016 the name has been changed to the Harvest Regional. I definitely consider that an improvement, although I cannot recall harvesting much from my vegetable garden in November. I remember once that my Brussels sprouts survived the winter, so I probably harvested some green miniature cabbages in November. 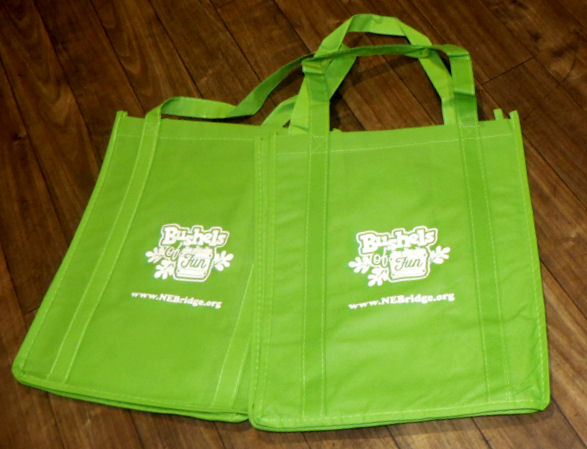 Everyone, including Ann and me, who won a section-top on Thursday won one of these groovy green bags. Goo goo g'joob!

The attendance at last year's event was especially mysterious. On Wednesday through Friday it was quite encouraging, but it dropped off dramatically – even catastrophically – on the weekend. Partly in response to this strange phenomenon, the finals for both the B Flight and the C Flight of the North American Pairs were scheduled to be held on Saturday and Sunday in Mansfield in 2016. This was the first time that these events have been held at the same time and location of a regional tournament.

This year's tournament was scheduled to begin on the day following the national election. I woke up at 1:30 to check the results, and I could not get back to sleep. At about 7 a.m. my Honda and I departed for the tournament. The traffic was fairly light, which allowed me to make it to the Holiday Inn in Mansfield by a little after 9 a.m. I wanted to try to find teammates for the Swiss, and so I immediately made my way to the partnership desk. I was a little surprised to find Helen Pawlowski, the district's Tournament Manager, sitting there. Helen explained that Sabrina Miles was coming in and that she was holding down the fort until that time. Helen definitely has weighty responsibilities at tournaments; I asked her if she wanted me to help. She did, and I did. 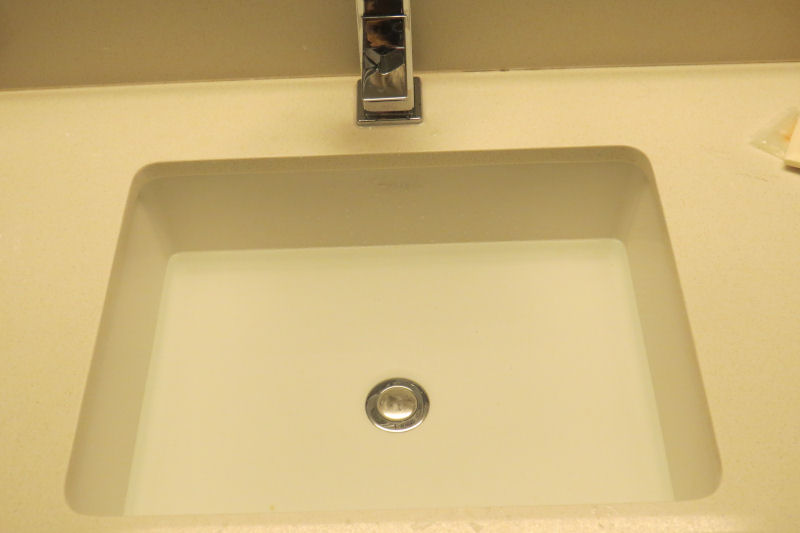 The rooms at the Holiday Inn have been refurbished. I don't know who ordered these huge square sinks.

The bridge gods rewarded me for my helpfulness when Martin and Ellen Dickau arrived at the desk just about the same time as Sabrina. Martin and Ellen were looking for teammates, and I nabbed them as they were about to begin filling out a card. My partner, Ann Hudson, arrived within five minutes. 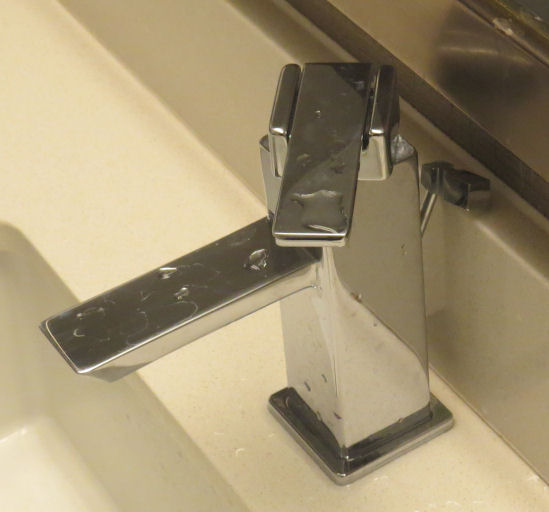 This is the best stopper I have ever seen in a hotel bathroom.

I customarily perform rather poorly at the beginning of the tournament, but not this time. In fact, Martin, Ellen, Ann, and I – a C team, mind you – won our first four matches in the Open Swiss. During the break I ate a little lunch and checked into the hotel room. It was pretty nice, and I knew that my wife Sue, who planned to join me on Thursday, would be very happy that the room included a small refrigerator.

After lunch our patchwork team faced the eventual winners of the event, Sheila Gabay, Lew Gamerman, Bob McCaw, and Luke Gillespie. Ann and I played against Sheila and Lew. Things seemed to go quite well at our table, but Martin and Ellen were not hopeful. In fact, our foursome lost by only six matchpoints. The match was determined by a hand that had seemed quite promising. The bidding went like this:


Before she bid 4♣, Sheila asked Ann if my 2♦ bid was game-forcing. Ann replied that it was. After the auction ended, I affirmed that her explanation was correct. However, I only had twelve points, and Sheila's bid made it pretty clear that the suits were not going to split nicely. In fact, Sheila had one spade, five hearts, and seven clubs. Lew, on the other hand, had four diamonds to the 10. I could therefore only use one diamond for ruffing, but I managed to take ten tricks. Unfortunately, at the other table Luke got to play 3NT, and he made it. 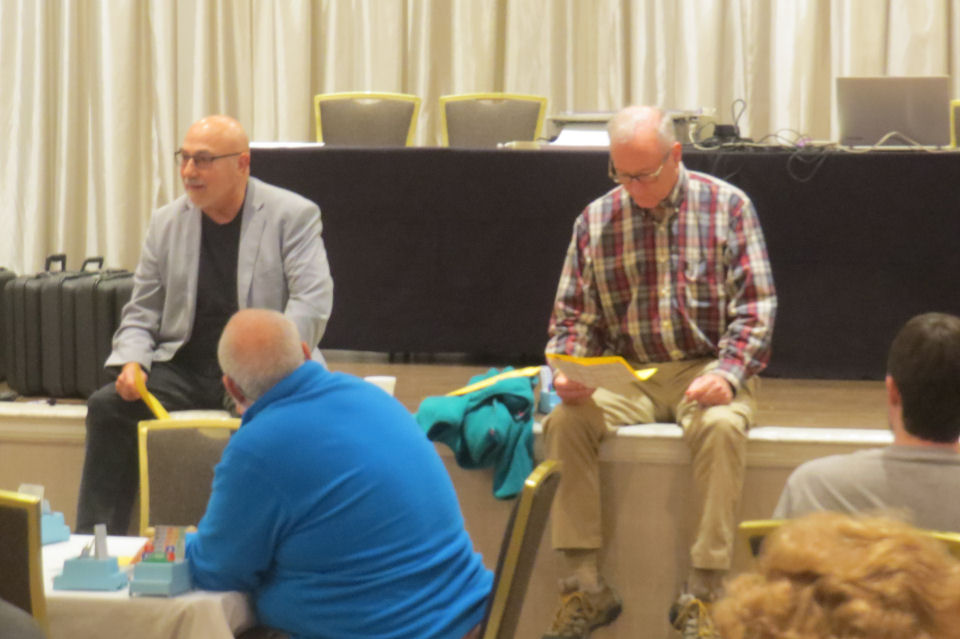 Lew Gamerman and Bob McCaw dissed Inverted Minors during their analysis of the hands during Thursday's lunch break.

We also lost two of our last three rounds. Nevertheless, we finished third in B and we won the C flight by a large margin. This was the first time that I had ever won a strat in Mansfield. I attempted to take photos of the winners of the A and B flights, but they had flown the coop. I did get photos of the winners of the Gold Rush Swiss, and I cajoled Jim Buss into taking a photo of our team.

I ate supper by myself at the Longhorn Steakhouse. I consumed a bowl of soup and a Steakhouse burger that I washed down with a beer.

I slept pretty well on Wednesday night. For breakfast I ate the red delicious apple that I had brought with me. I supplemented that with coffee and a muffin supplied by the district. 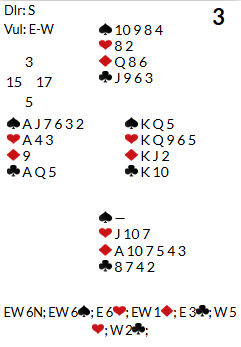 In this case the real dummy was the declarer.

Ann and I played in the Mid-Flight pairs on Thursday. In the morning we received many gifts from our opponents. After seven rounds we were in first place with over 67%. On the penultimate hand I bid 6♠. With no encouragement from his partner RHO had bid up to 5♦, and so I knew that the distribution was going to be wacky. Nevertheless I felt comfortable that we could take twelve tricks. LHO led a diamond, my singleton. The board had KJ2. I could see no reason for playing the king, and so I ducked. RHO took the trick and led another diamond.

Four trump were out against me, but I had the top four. Unless I lost a trump trick, I could see twelve certain tricks. Reasoning that the greatest danger was the second trick, I ruffed with the ace. Unfortunately, the trump split 4-0, and I went down. At the time I convinced myself that I had made the right play.

During lunch something occurred to me. RHO had taken the first trick with the ace, not the queen. I didn't have the queen, and neither did the board. LHO must have had it. I checked the the hand record, and my worst suspicions were confirmed. I could have just discarded on the second trick and taken it with dummy's king. There was no need to trump at all.

We still had the best score, and we therefore won a treasured tote bag. Nevertheless, I felt like an idiot for not paying enough attention to what RHO had played on that first trick. 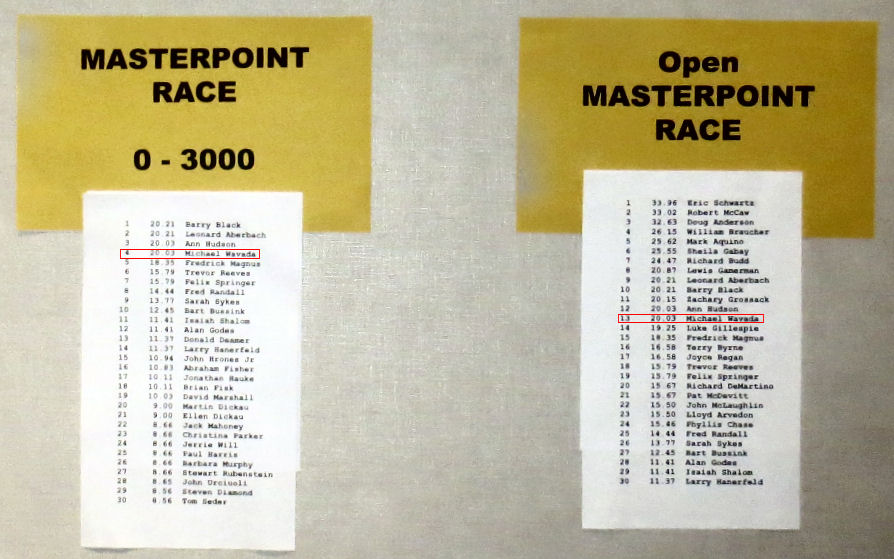 Whoa, Nellie! Ann and I were on the Masterpoint Races lists on Friday.

Both Ann and I played better in the afternoon, but our opponents were not as generous as before. Still, we scored 57% and ended up in second place overall. It was hard to believe, but Ann and I had earned over twenty masterpoints in just two days.

Sue had informed me that she and her partner Marianne Hope planned to play in the evening session. Therefore, I cheerfully accepted David and Theresa Waltz's invitation to join them at the Trattoria Della Nonna. I had a great time getting to know the Waltzes a little better. The Barbera wine was, needless to say, quite good, but my Bolognese was uninspired. I should have ordered sea food, as David and Theresa did.

On Friday morning Sue and I took breakfast at the Looking Glass Cafe. We had enjoyed this place in 2015, but the food on this occasion was mediocre at best.

Ann and I played in the Mid-flight Pairs again, but the competition seemed tougher than on Thursday. We played as well as we did then, but our opponents were uncooperative, and nothing went right for us. I had three opportunities to take two-way finesses, and I guessed wrong on all three. 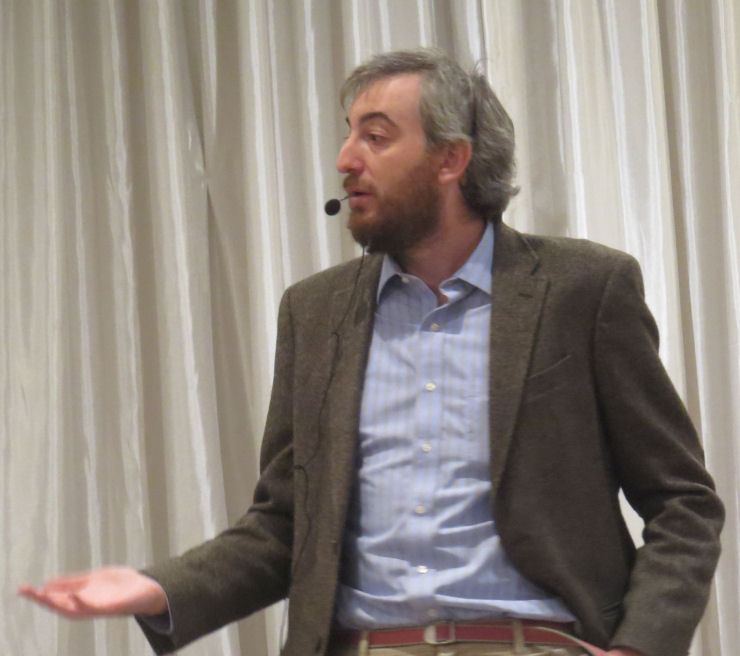 Adam Parrish said that using the headset made him feel like Madonna.

Sue, Marianne, and I went out for supper. Our first choice was Cibo Matto, but they told us there would be a forty-five-minute wait for a table. We drove to the Longhorn again, where we spent twenty-five minutes at the bar waiting to be seated. Watching Michigan State's basketball team warm up for its first basketball game was not my idea of a fascinating evening. On the other hand, my baby-back ribs and broccoli were fine, and the beer was wet and cold.

I hosted the meeting of the Communications Committee on Saturday morning. Nothing controversial came up. I told everyone that I had sent out about 10,000 e-mails promoting the Mansfield tournament. I should have sent out one more batch two or three weeks before the tournament. I also told the other committee members how I planned to promote the Cromwell tournament, which is now known as the Presidential Regional. Wait until you hear about Calvin Coolidge's VP.

The crowd definitely enjoyed his presentation on Friday morning.

The morning session was bizarre. Several of our opponents made unforced mistakes, and others made outrageous bids that somehow worked. One of them paused for at least six minutes before setting the 7NT card on the table. He had misinterpreted his partner's Blackwood response, and I was looking at the ace of hearts. Ann, however, led a club, and they found thirteen tricks.

Our opponents in the afternoon session played in a more reasonable fashion. I was very disappointed in our play in both sessions, but we did end up over 50% both times, and we did make it to the second day. Some very good pairs were not as fortunate. 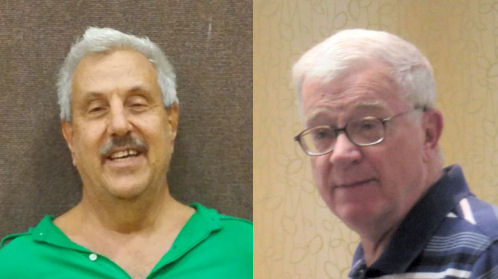 Lloyd Arvedon and Jay Stiefel won the tournament to determine the NAP qualifiers in Flight A. The other pairs that will represent the district are Frank Merblum-Doug Doub and Stephen Rzewski-Margie Sullivan.

Saturday evening brought a very interesting meeting of the Executive Committee. Bob Bertoni unveiled the plan of the Tournament Committee to bring real knockouts back to our regional tournaments. Other districts have proven that it can be done. Cromwell will feature a four-session knockout on Saturday and Sunday. This format will be repeated in Nashua and Warwick. I won't let the cat out of the bag, but there will be something very special in Nashua. This plan was passed unanimously at both the Executive Committee meeting on Friday night and at the Board of Delegates meeting on Sunday. Are you ready to rumble? 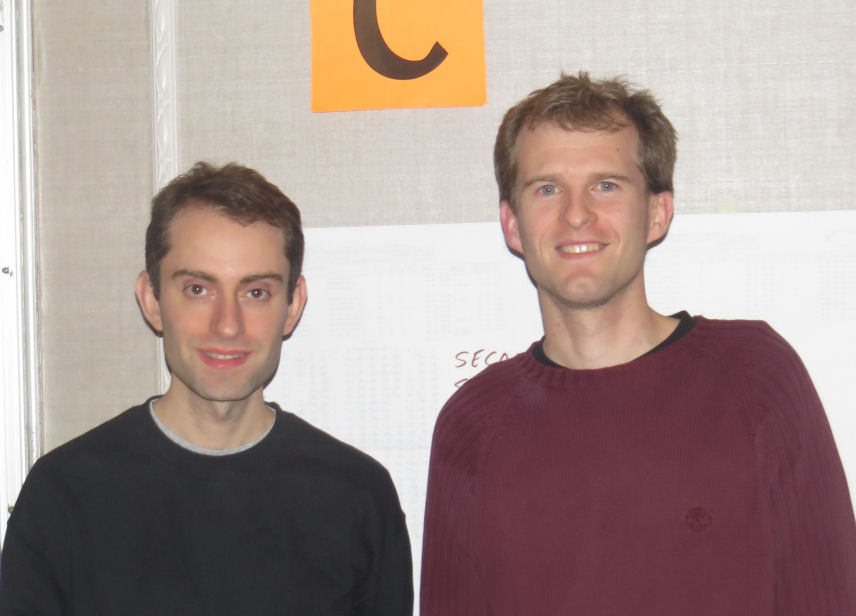 Michael Lieberman and Reid Barton won the tournament to determine the NAP qualifiers in Flight B. The other pairs that will represent the district are Jack Mahoney-Dan Morgenstern, Ivanie Yeo-Lon Sunshine, and Gloria McDevitt-Brian Weiner Duran.

Another positive effect of the ExComm Meeting was being introduced to Jack Mahoney from Maine. He seemed quite interested in what the Communications Committee was doing. 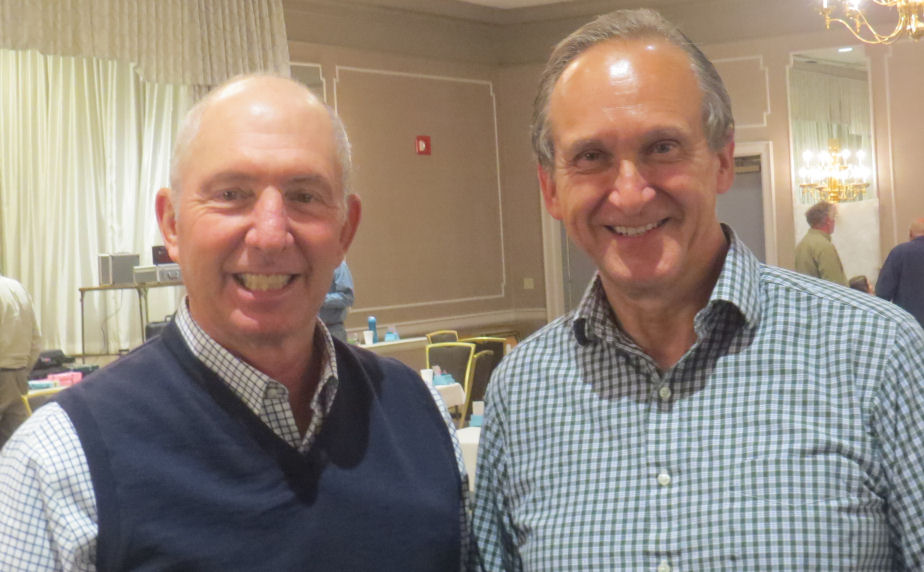 My friends from the Hartford Bridge Club, Buz Kohn and Trevor Reeves, won the tournament to determine the NAP qualifiers in Flight C. The other pairs that will represent the district are Skip Page-Ron Ouellet, Timothy Walker-Lynn Duncan, and Gordon Lane-James Hickey.

The less said about our play on Sunday the better. Ann and I were both tired, and the competition was exceptionally stiff. Early in the morning sessionI made three straight bad opening leads. After that I had very little to work with. I passed a lot, tried to follow suit, and gave count and negative attitude. We fared very badly, but it did not sour our attitude about the tournament, which, as far as I could determine, was a success in every way except one.