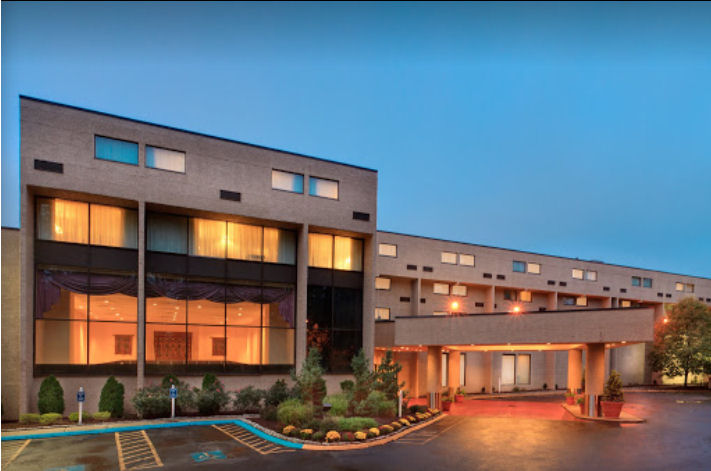 By Monday there was almost no snow even in the parking lot.

I had been checking the Weather Channel's website for several weeks in early February, and the forecast was extremely promising. It really appeared that for the first time in recent memory the snow and cold weather would not be a major factor for the tournament in Cromwell.

I was scheduled to play for the first five days with Ann Hudson. My wife Sue and I met her at the Hampton Inn in Enfield, and we rode together to Cromwell on Wednesday morning. Ann and I picked up good partners for the Open Swiss, Bill Nason and Robert Eachus. Only thirteen teams were participating in the Swiss, but there appeared to be pretty good attendance in the other games. Our team started out in the three-way, and we promptly lost both matches. The highlight was one very unusual auction in the very first round.

South had deliberately passed Ann's insufficient bid in order to allow his partner to compete at the two level. Since I had a weak hand, and my diamonds were much better than my hearts, I also passed. Ann went down one, but 3♦ went down two at the other table.

At the lunch break we were 1-3. We did much better in the afternoon despite a comical auction on one of the best hands that ever burned my fingers: 28 points with 3-4-4-2 distribution: 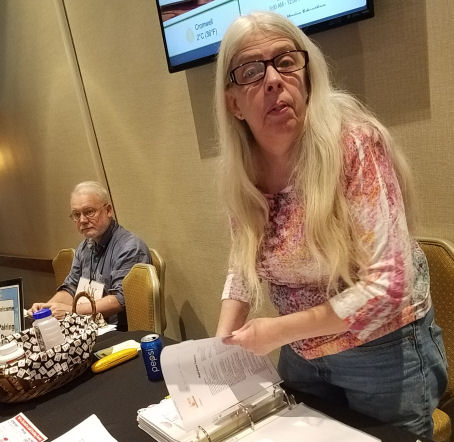 David and Debbie kept the tournament running smoothly from Wednesday through Monday.

Ann and I had engaged in a rather long discussion via e-mail whether to use 2♥ to show a bust after a 2♣ opening. I was pretty sure that we had decided NOT to use it. Ann's recollection was different. So, she meant her 2♦ bid to be encouraging. My 4NT bid, which I had never made before in my entire life, was meant to show a balanced hand with 28-29 points. However, Ann thought that we were playing that 3NT was used for ALL balanced hands of 25+. She took 4NT as 1430 for diamonds or maybe just aces. She showed one with her 5♣ bid. I interpreted her bid as Stayman, and so I mentioned my hearts. She took it as a signoff. Bidding is easy, no?

The E-W pair at the other table bid 7NT, which only required a 3-2 diamond split: Three spades, three hearts, five diamonds, and two clubs. Playing in our worst suit, I lost two heart tricks, and the team lost 14 IMPs. Nevertheless, we won that match 31-26. We also won the last match, which brought us all the way up to second place in B. We were one point behind Susan Seckinger's team, which had vanquished us in the opening three-way. 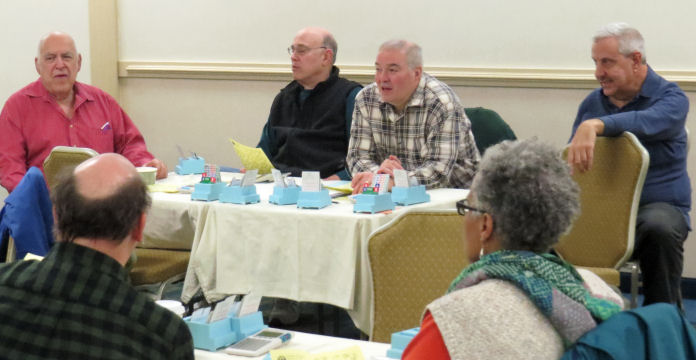 Susan asked us to join her and a new partner in Thursday's Swiss. She was trading Edgar Ramspeck in for another player from the Hartford Bridge Club, Nancy Bartone.

It actually rained on Ann's car on the way back to Enfield. Imagine that! I have always maintained that I will gladly accept all of the rain that Zeus Cloudgatherer wants to bring us in the months of December, January, and February.

After we arrived back at the Radisson Hotel on Thursday morning, David Metcalf, who edits the Daily Bulletin sought me out. He told me that on Wednesday he had heard people at two different tables talking about President Garfield. I had decided to write a light-hearted one-page article about six different presidents, one for each of the six days of the first Presidential Regional Tournament. Garfield was featured on Wednesday. David's news was very gratifying.

The attendance at the panel discussion was pretty good. That's Ann in the striped shirt on the left.

Ann and I worked the Partnership and Hospitality Desks before the first round. Sometimes the partnership job seems nearly impossible; sometimes there is almost nothing to do. The latter was the case on Thursday morning.

Attendance at Thursday's Open Swiss was much better. Twenty-five teams competed. We made the mistake of getting off to a pretty good start. We then ran into a meat-grinder in the last couple of rounds. Our team won only three matches, and we finished just out of the money.

This ended up as our auction:

2♦ showed invitational values with at least four hearts. I was not sure what 2♠ was supposed to mean in a Drury auction, but I was hoping to hear 3♣ or 3♦ from Ann. I had no intention of stopping short of slam, but at the time I could think of no way to find out if she could cover both of of my side-suit losers. At the other table Tom Lorch and Reg Harvery used Flannery to find the granny.

Using exclusion Blackwood, which we added to the card after the match, might have worked for this hand.

4♠ asks for key cards in hearts – not counting the ♠A. 4NT (first step) admits to one key card, which, from my perspective, could only be the ♦A. That would have left her with six or seven other points. Many combinations would suffice to cover the ♣J.

Without that convention on our card, I could probably have achieved the same result using a cue bid:

We play that cue bids at the five level show first round controls. Maybe I will do better next time. 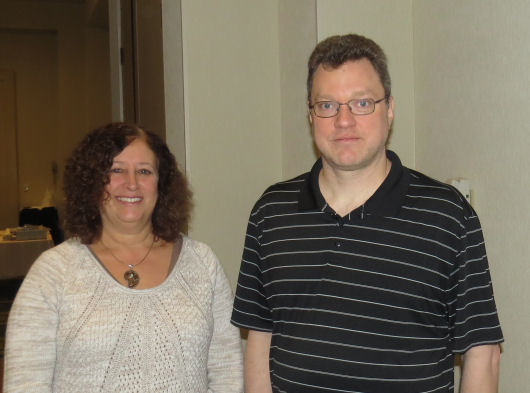 Linda and Dan had never played together, but they prevailed in the Mid-Flight Pairs.

On Friday morning Ann and I again worked the Partnership and Hospitality Desks. This time I matched up Dan Jablonski and Linda Ahrens, who went on to win the Mid-Range pairs. At the end we had two unmatched pairs with markedly different masterpoint totals. David Rock volunteered to play with one, and Debbie Ouelette played with the other. David and Debbie did whatever was required to make the tournament run smoothly throughout its duration.

The loudest buzz around the tournament on Friday morning was that the previous evening's “Extra Points Pairs” game had drawn seventeen tables, which was eleven more than in 2016! Evidently the new format was quite attractive to the players.

Ann and I played pairs on Friday. We were awful in the second half of the morning session, but we came back with a pretty good afternoon session. Since we do not get to play together much, we considered the first three days of this tournament as a chance to iron out the wrinkles in our rather complex bidding system. We actually felt pretty good about our game.

I went out to eat on Friday evening at the Baci Grill with Bob and Shirley Derrah, my teaching partners at two middle schools in Springfield. We had a delightful time. Sue did not join us because she wanted to try her hand at the Extra Points Pairs game.

My Communication Committee met on Saturday morning. I issued my usual rant about the ACBL's Partnership Desk software program. It had been showing each event for the the tournament multiple times. I complained to the CFO, but it still took over two weeks before it was in working order, which, by the way, is none too good. Unfortunately, we appear to be stuck with this mess.

I have been pushing for consideration of giving out stickers at regional tournaments. A couple of people are going to provide us with costs. 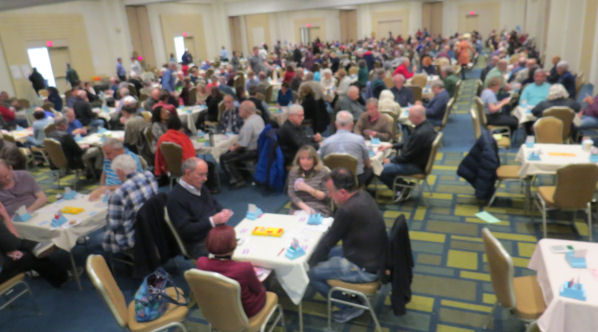 The ballroom was packed on Saturday. Five brackets of players were eager to compete in knockouts again.

After the CommComm meeting I was shocked by the size of crowd in the hallway. It appeared that my high hopes for the Weekend Knockout might be realized. It was not easy, but I located Ann and our teammates for the weekend, Mark (Blanch) Blanchard and Amy Rhodes. He is from Long Island; she is from the city.

Whoa Nelly, five brackets! Bob Bertoni, the district's president, had expected three. Our team won both halves of our morning match in Bracket 2. In the second round, however, we played two very strong teams, the two teams that met in the finals. We tied the eventual champions in one match, but we lost to the other team by sixteen.

Ann thought that she had bid her hand to the max. I was hoping that she would see that I could not be cue bidding because I had skipped spades and clubs. If I was showing a strong second suit, her hand might be (and was) magical. I had hoped that she would be able to bid 5♣, in which case I would have signed off in 6♥. Oh, well. 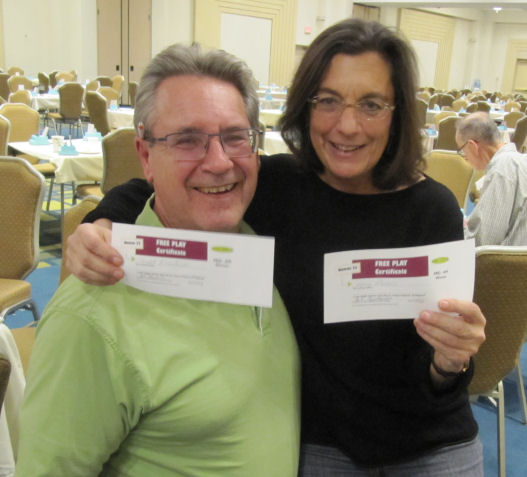 Blanch and Amy cleaned up in the Pro-Am. Those certificates that they are holding entitled them to a free game.

I attended the Executive Committee meeting over supper. We learned that the tournament at that point was up over fifty tables from last year, which had also been up a lot over 2015. In the end the 2017 Presidential Regional had 102 more tables than the 2016 Teams Regional. The good weather was a positive factor, but the main reason was a lot of hard work by some talented and dedicated people.

My partner for the Saturday evening Pro-Am game had to cancel, and so I did not play. My teammates Blanch and Amy not only played; they came in first in all three flights.

I got to bed early, but I did not sleep well. I had made an appointment with Peter Marcus at 7 a.m. on Sunday. He taught me how to use ACBLScore to produce a csv file that I could use for the Best in Class awards and other things.

I was rested enough to learn how to manipulate those files, but not enough to play good bridge. By Sunday afternoon I was on my ninth or tenth cup of coffee, but the caffeine was not producing the desired effect. We started OK, but we lost the fifth, sixth, and seventh rounds after lunch. Each loss was at least partially attributable to my blunders. We won the eighth round, even though by then I could hardly tell the spades from the clubs. Fortunately, our opponents were worse. I offered Blanch and Amy my sincere apologies, and they were very gracious.

Good news came from two different sources. The first was that four of my regular partners – Ken Leopold, Jeanne Striefler, Buz Kohn, and Trevor Reeves – won both the 0-1500 Swiss on Sunday and the highly prestigious Single-Session Swiss on Saturday. Ken will take on all comers next year as the two-time defending champion of the 0-1500 Swiss.

The second was that Sue and her partner Jeff Stock had done something incredible on Sunday. There was no 299er game, so they were shunted into the Fast Pairs. They finished first North-South in the first session, outscoring both the Feldheim-Lavin and the Nason-Eachus pairs! She was delighted to have won 2.58 gold points.

I chose not to play on Monday. I really needed to recharge my internal batteries.