At the beginning of every month District 25's Director, Mark Aquino, sends out congratulatory emails to New England bridge players who have advanced in rank during the previous month. Some of them respond, and Mark selects a few of the most interesting ones to be posted on NEBridge.org. Below are a few memorable ones from players who achieved a new rank in September of 2017. 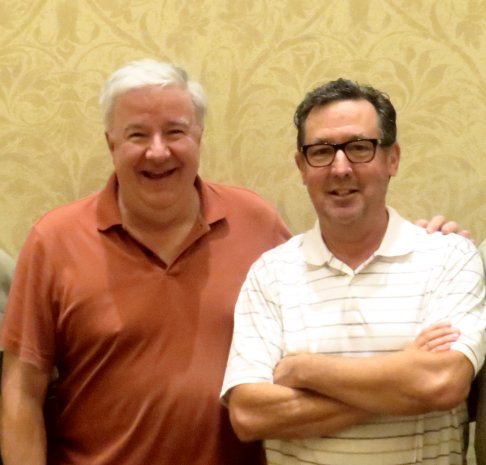 Like many folks back in the day, I learned to play bridge in college (always a good excuse to skip classes!). Early in my professional insurance career, I met my long time bridge partner and best friend, John Lombardo. We played some club bridge in the early eighties – I still have some master point paper award slips but kids and careers took us away from the game for well over a decade. Imagine our surprise when we decided to give bridge another try and walked back into the Warwick (RI) Bridge Club only to have Director Bob Garfinkel remember us from so many years before!

My journey to Life Master and beyond has been one joyous learning experience. Just ask me about a misunderstanding of Texas Transfers during an early Regional Tournament which resulted in my playing a four-heart contract while having a total of only three trump – and, yes, I managed to keep a straight face while going down a million!

Now retired, I enjoy bridge for many reasons, especially the competitive and social aspects it affords. The more I learn about this great game, the more I realize I still have to learn. Bridge is truly the game for a lifetime!

The key to my limited success – if there is one – is being blessed with a sustained partnership with which to share this remarkable odyssey. Oh yes, and the fact that he always finds a way to make me look good!

Thank you for your letter congratulating me on attaining Regional Master status. I just had a terrible play the day before, and your letter cheered me up. :-)

Since I wrote you last year, my wish has come true! An anonymous donor gave money to our club, the Northampton Bridge Club, to purchase a dealing machine, and then, starting this year, our club has added another day of play each week. Playing twice a week and being able to review hand records has really helped my game and that of many others in our club.

Earlier this month we formed a team and played our first ever Knockout in the Warwick Regional, and we tied for third finish in our bracket. Needless to say, we are now hooked and can’t wait to play in Mansfield!

To the anonymous donor, thank you so much!

By the way, I am now happily helping out in maintaining my club’s blog, which you can read at http://www.northamptonbridgeclub.com/.

I started playing duplicate bridge on the island of Maui at the Kihei bridge club in 2009. A girlfriend of mine asked me if I might be interested in trying it. Her name is Diane Pierce and I am forever grateful to her for asking me to try this wonderful game. We went over to the Maui Bridge club in Kihei, Maui Hawaii and met the director Ned Downey. We played a few games there and then when my husband and I returned from our winter there, I convinced my husband to take me to the Pembury bridge club in Pittsfield, MA. where we walked in like deer in the headlight waiting to see what would happen. We were greeted by Manny Henriques who was the director at the time. I cannot thank Manny enough for taking me under his wing and helping me through the process. He managed to get seasoned players to play with me even though I certainly was a novice. I joined the ACBL that spring as a member of Unit 196 of District 25.

From there it was slow going at first. In 2009 I managed a total of 10 masterpoints.

In 2010 I started going to tournaments: sectionals in Auburn, MA, and Springfield, MA. as well as the snowbird sectional in Maui. I also started taking lessons in Maui under Ned Downey who has published two bridge books, which were very helpful in those early years.

2011 I attended many tournaments: Sectionals in Sturbridge, MA. Kihei, HI, and Auburn, MA. Then on to regionals in Warwick, RI and Danbury, CT. This is where I began to understand the difference between red and gold points and how difficult those gold were to come by.

2012 I was lucky enough to attend two national tournaments the first one was in Philadelphia where four lady friends and I played and also kibitzed. I was fortunate to kibitz at Zia Mahmood’s table where he needed a break and asked me to turn his cards when he was the dummy!!! I attended the fall national in San Francisco as well. Both events went well. I also managed to get some gold points in Knockout events in Warwick, RI. Saratoga, NY, and the Honolulu regional.

2013 I struck gold and silver at various tournaments. Knockout events in Sturbridge, MA and Saratoga NY, and I won the Golden Opportunity pairs event with my friend Roger Price in Danbury, CT. That event gave me enough gold for my Life Master. It was a day that ranks up there at the top of those memorable lifetime experiences. I also started taking lessons with our new Pembury club director Tim Joder. He volunteered to teach the members all he had learned in his long and successful bridge career. We took lessons and I took copious notes and recorded them all in a 110-page book that I complied as a result. He wanted to elevate the play at the club. He was also kind enough to start playing with me on occasion.

2014 I continued to play in Maui at the Kihei bridge club as well as the new West Maui Bridge Club which just started running duplicate games under the direction of Jeannie Murrell. She runs a great game which includes lunch in paradise. I also met a new partner from South Korea. Her name is Sophie Lee. She and I play almost every Tuesday in the winter. I played the Maui Snowbird sectional as well as the EGG tournament in Sturbridge this year, acquiring my Bronze Life master as a result. I also started to play with Tim Joder on a more regular basis and as a result continued to learn and improve my bidding and play.

In the last three years I have won both the Ace of Clubs and the Mini McKenney in unit 196 for my master point group and have accumulated over 490 master points. This has brought me up to Silver Life master as of this writing.

Bridge doesn’t take a village, but it does take kind and understanding partners and directors. So, as a result I want to take time to thank all my partners over the years: My husband Lyndal Winslow, who plays with me even when he doesn’t want to, my Pembury partners: Sandy Walters, Coreen Nejame, Paula Dambrauskas, Stephanie Beling, and Valerie Solon. My Maui partners: Diane Pierce, Chris Ryder, Mari Livingston, Sophie Lee, Jan Hendrix, and Satish Gupta.

Finally, my present partner Tim Joder deserves most of the credit for making me the bridge player I am today. Thanksm Tim.