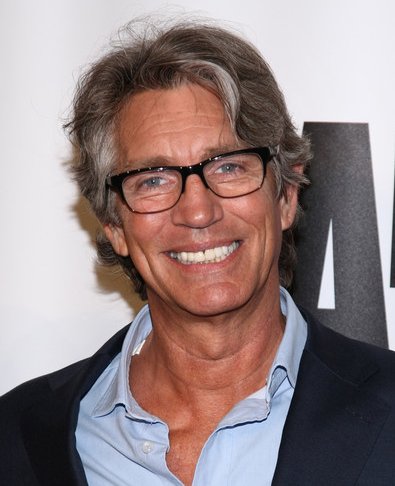 The forecast for the tournament was as good as could be expected in New England in February, but the weather on Tuesday, the day before the tournament began, was another matter entirely. At my house we got four or five inches of snow topped by a stubborn crust of ice. Although the driving on Wednesday morning was not bad at all, many potential players were no doubt scared off by what they viewed from their windows.

My partner for Wednesday was Ann Hudson. She and her husband spend most of the winter in warmer climes, and so we had not played together since Honolulu (which you can read about here). We planned to play in the weekend knockout and on Monday. So, we basically used Wednesday's Mid-flight pairs game as a warm-up. Both sessions were disastrous.

I spent the lunch break in the 299er room listening to Ron Mak and Tom Joyce discuss the hands that we had played so badly. I discovered that we got fixed a couple of times, and I picked up a few pointers about a couple of others. It is difficult for these guys to decide the proper level at which to address their remarks. Most of the people in attendance were 299ers, and some of the analysis went over their heads. I am not sure what can be done about it. 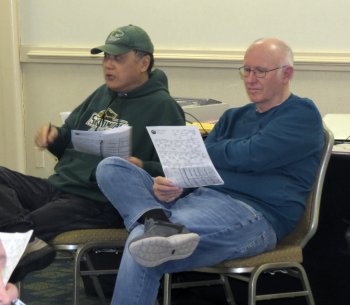 At the end of the second session I drove Ann back to Suffield. We were both cheerful enough, but I cannot say that I had much confidence that we could right the ship by the weekend.

On Wednesday evening I ordered a pizza for dinner. After supper I watched two episodes of Elementary with my cat Giacomo on my lap.

My partner for the first knockout was Paul Burnham, a lawyer from Wilton. We had not played together for a long time, and so we spent the best part of the hour before the first match going over our convention card. We made quite a few adjustments. Fortunately, we encountered very few problems with the bidding.

Our teammates were Felix Springer, another lawyer (retired), and Tom Gerchman, an actuary. The event had three brackets. We were probably one of the top seeds in the second bracket, but we were thousands of points below the bottom seed in the top bracket. 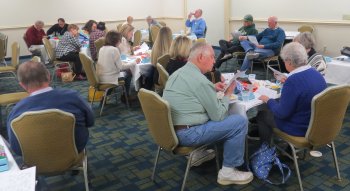 We almost came a-cropper in the first round, which was a three-way. We got clobbered in one of the matches, and we nearly blew a sizable halftime lead in the other. The problem hand was one in which Paul and I stopped at 5♦ and made an overtrick because of a favorable lay of the cards. I knew our counterparts at the other table quite well from the Hartford Bridge Club. They had a lot less experience than we did. I was worried that out of desperation they might just bid the slam without too much investigation. I wasn't far off. This was their auction:

Fortunately we held on to win the match. We also won both halves of the next match easily. We then cruised through the semifinal match on Friday morning. In the finals we had a 23-point lead at the half. However, I lost concentration in the third group of six boards and made two serious mistakes. I knew that I had to calm myself down in order to play well for the last six hands. I told the other people at our table that I needed a break. I walked around the deserted hallway for five minutes or so. When I returned I played much better for the last six hands. These hands produced a few imps for us, and we held on for the victory.

One reason that I love knockouts is that, because you play so many boards against the opponents, you get a chance to know them pretty well. One of our opponents, Audrey Thirkell from Maine, made two rather unusual comments during the match. At one point she remarked that she preferred computer-generated deals because she could read everyone else's cards more easily than when the cards had been shuffled. I let this go, but I felt compelled to challenge her other claim that I resembled Julia Roberts's brother. She pulled up a photo of him on her phone, and, sure enough, he was my dopplegänger in every imaginable respect. So, from now on I intend to borrow his photo to accompany my byline for these articles. This way, my legions of fans will get a better understanding of my total essence. 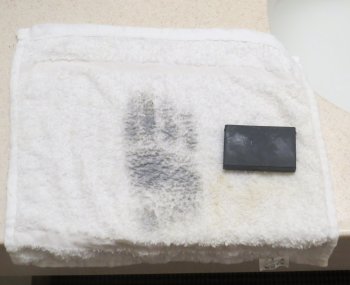 I feel certain that poor Eric is constantly bothered by people telling him how much he reminds them of me.

Felix suggested that we switch things around for the weekend knockout. He volunteered to play with Ann. I would play with my regular Wednesday evening partner, Ken Leopold. Everyone agreed to this.

During the lunch break on Friday I attended Victor King's presentation on the Woolsey defense against a 1NT opening. Although he presented it as a tactic that allows one to interfere with increased frequency, it seemed to me less disruptive than DONT or Meckwell. For example, Woolsey's structure does not allow for interfering with a long minor suit at the two level. On the other hand, it does make it easier for the defenders to find and evaluate a fit in a major suit.

Victor did a good job of explaining the fundamentals, certainly far better than anything that I have found on the Internet. This was important for me because I was scheduled to play this convention with Ken on the following day.

Because I had a Communications Committee meeting at 8:30 on Saturday morning, Sue and I stayed overnight at the Red Lion Hotel on Friday. I had hoped to celebrate our team's victory at supper with her, but she was committed to playing in the evening side game. I therefore drove to KFC and dined in our hotel room. I saw long-time friend and former president of both the CBA and the NEBC, Ausra Geaski, at KFC. 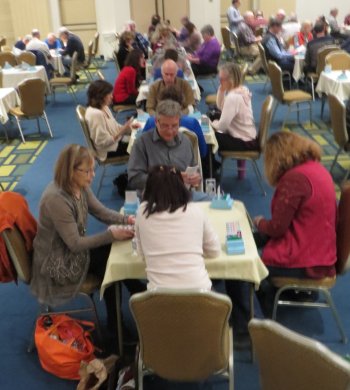 Semifinals of Bracket 4 of the Weekend KO

At the Comm Comm meeting we discussed how to promote the upcoming tournament at the Cape. Bob Bertoni suggested that we emphasize that both silver and gold points are awarded there. He also said that some people might be interested in earning points in the annual “Senior” ratings given out by the ACBL. Throughout the nation only a few events qualify for these. I decided that I would send the NABC portion of the mailings a week or two earlier than usual and emphasize these two factors.

I also learned that the KO at the Cape will use the hybrid format newly approved by the ACBL. The first day will comprise a daylong Round Robin Swiss in each bracket. The top four teams in each bracket will then square off on the second day in the familiar knockout format. This format was used in Bracket 1 of the KO that ended on Friday in Cromwell, and it was very well received.

We found ourselves in Bracket 3 of the Saturday-Sunday KO. Once again we were able to advance to the afternoon round because one of the teams in the three-way lost both matches. At the break in the afternoon session we had a pretty good lead over one team and about the same deficit against the other. However, we did no better against the latter in the second half, and we actually lost part of our margin against the former. All three teams won one match, but we had the worst net score. The team that we defeated ended up losing in the final to the team that beat us in the first round.

On Saturday evening the Executive Committee met in a huge room that I had never seen before. The supper was a buffet, which is probably more practical than the usual approach. I wasn't crazy about the food, however, and nothing was labeled. We had breaded mystery meat and some other meat that was not.

I cannot remember one of these meetings with such a large and substantial agenda. We agreed to fund a second team for the Grand National Teams in Flight B and Flight C. The stipend for the third and fourth pairs in Flights B and C of the North American Pairs will be increased to $200 each. A full breakfast will be served in Sturbridge on Sunday to the GNT participants as well as anyone still playing in the Gold Mine Regional. All of this will be paid for from the Grass Roots fund, which has more than $20,000 in it and can only be spent promoting the NAP and GNT. 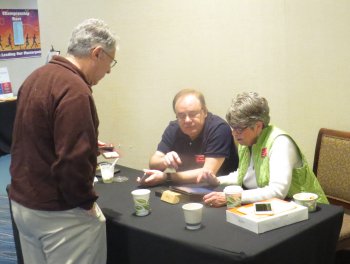 Joe Brouillard, Lois DeBlois, and their helpers did a brisk business selling vouchers for entry fees. Cash is so nineties.

Felix said that he and Ken wanted to play in the pairs on Sunday. So, Ann and needed to seek new teammates for the Mid-Flight Swiss. I filled out a card at the Partnership Desk on Saturday evening and arrived downstairs at about 9 a.m. to see if anyone was looking for teammates. Not long after my arrival we teamed up with Jiang Chen and Qinqin (pronounced Chinchin) Wang.

We lost the first match by four imps. We won our next match against Sue's team, and we were victorious in the next three as well. At that point we had risen to third place overall.

We lost the sixth match to the team that ended up winning the event. Ann and I were guilty of some deadly defensive lapses in the seventh match. One hand ruined our chances in the last match. Jiang bid a very good slam, but he went down because of an unlucky trump split. So, our team just missed placing, but we had a good time and made some new friends. If one discounts the seventh match, Ann and I played better than we had in some time. We asked our teammates to join us again on Monday, but they said that they needed to get back to Boston.

OMG! I just learned that Sue and her teammates tied for first in Sunday's Gold Rush Swiss!

A little frozen precipitation occurred on Sunday night. It scarcely affected driving at all, but the apocalyptic forecasts on television and radio evidently persuaded many local players to stay home. The attendance at Monday's games, which were dedicated to the memory of my mentor, Allan Clamage, was disappointing, if understandable.

Ann and I were lucky to team up with our old friends from Western Mass, Bob Sagor and Judy Hyde, in Monday's Open Swiss. Bob and Judy had won Wednesday's Swiss with Felix and Rhona Sutin. They also had played on the team that clobbered us in the first round of the Thursday-Friday KO.

The best hand of the tournament for me was one in which I bid a grand slam, and Ann successfully negotiated thirteen tricks. At the other table they stopped in game. Nevertheless, our opponents in this match ended up winning the C strat.

Our team was actually in a pretty good position until the last round, in which we faced a very good A team. Two hands ruined us. I bungled the play on a game contract, and Bob bid a grand slam that fell one trick short. At our table the opponents stopped at six. So, we got blitzed. If we had earned even a few victory points, we would have placed.

Oh, well. We played some good teams, I won an event (and so did Sue), and I got to reconnect with a lot of friends whom I had not seen for several months. I made several new friends, too. Tournaments in this district are just the best. Tell me I'm wrong.