An Introduction to Team Games

Note: This article uses the schedule for the 2019 Presidential Regional for examples. Similar schedules are used in all regional tournaments in New England.

The Presidential Regional in Cromwell, CT, which offers team games on all six days, is the perfect opportunity for players in District 25 to discover the fun and excitement of playing in these contests. Most of the most prestigious events in the United States and the world are team games—the Spingold, the Vanderbilt, the Bermuda Cup, and the Venice Cup to name a few. In fact, some of the best players in the world play exclusively in team games. They seldom or never play in the kind of duplicate pairs games held in bridge clubs every day.

Team games can be a little more complicated than pairs games. If you have a question, just ask. The opponents will often know the answer; the directors will always know the answer.

The basic unit of all kinds of teams games is the match in which you and your partner play a number of boards against a pair from another team. At another table your teammates will be playing the same boards (not at the same time) against your opponents' teammates. If you are sitting North-South, your teammates sit East-West. If you are sitting East-West, your teammates sit North-South. Thus, a match involves eight players, four from each side. When all of the boards have been played, the scores are compared. In a team game your results are compared with those of the opponents at the other table. They are not compared with those of anyone else playing in the event.

You can see why this works by looking at it from the perspective of the boards.

In the first half boards 1-6 are played by team A (N-S) and B (E-W). At the conclusion of that half the latter brings the boards to their teammates (B N-S) who play them against team A's East-West team in the second half. After delivering the boards B's East-West team moves to the table occupied by C's North-South team to play boards 7-12.

Confused? Here is the same chart from the perspective of the North-South teams:

There are several kinds of team events, almost all of which were in evidence in Cromwell. 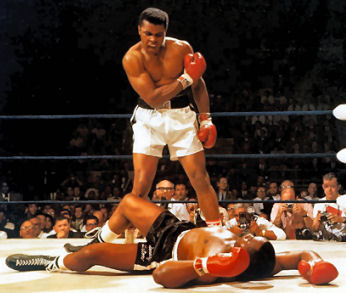 Knockouts: The format for a knockout is simple. A match usually consists of 24 boards (more in the top bracket) and lasts for one session. In a head-to-head match the winner advances, and the loser is out. Three-way matches usually consist of two sets of twelve boards. Two of the three teams advance; only one is eliminated. A knockout event lasts until only one team remains. It could take four sessions or even longer. Because of the duration of the event it is not uncommon for a team to consist of five or six players. In Cromwell the knockouts are scheduled for four sessions on two consecutive morning-afternoons.

Knockouts are bracketed. Your opponents will, to the extent possible, have total masterpoints that are in the same range as yours. Gold points are generally awarded to all members of teams that survive two sessions.

The results are posted for each bracket. Teams are assigned numbers, but all results are shown by the captain's name.

In Cromwell the following knockouts are scheduled:

Compact Knockouts: Each session is divided into two matches of (usually) twelve boards. In a head-to-head match the winner advances, and the loser is out. Three-way matches usually consist of two sets of six boards. Two of the three teams advance; only one is eliminated. A compact knockout event lasts until only one team remains, which is ordinarily two sessions.  Posting of results is the same as for knockouts. Teams must have only four members.

Compact Knockouts are bracketed. Your opponents will, to the extent possible, have total masterpoints that are in the same range as yours. Gold points are awarded to the teams that make it to the second session. 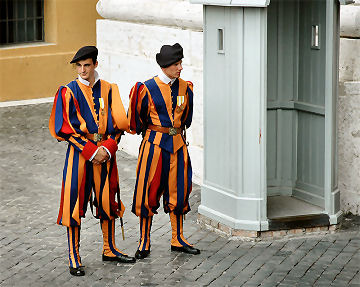 The scoring in a Swiss is a little complicated. It will be explained below. Teams of five or six players are allowed in most two-session Swiss events. After the first match the teams with the best records are paired against each other by the computer. So, here is an important tip for playing in a Swiss event: Win your last match BIG.

Every team is assigned a number. Results are posted by team number. Points are awarded in each stratum of the event. The A/B, A/X, and B/C Swiss have two strata. The other Swiss events will also be stratified, but the directors will determine the appropriate number of strata.

In Cromwell the following Swiss events are scheduled:

Round Robin (Bracketed Swiss): The field is divided into groups of (usually) eight teams. Over the course of two sessions your team plays matches against each of the other teams in the group. Teams must have only four members. 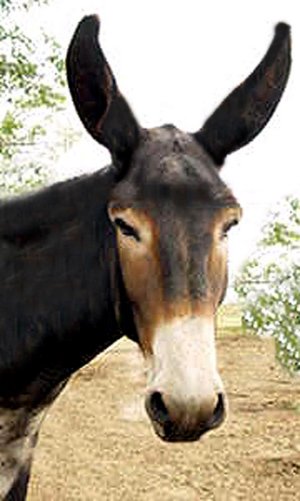 Bracketed Swiss-Knockout: In 2018 the ACBL authorized a new four-session hybrid event. The last two sessions must be a four-team knockout consisting, as in regular knockouts, of head-to-head matches. The first two sessions, which determine which four teams survive to the third session, can be a Bracketed Swiss with as few as five teams in each bracket. This format, which debuted in New England at the 2019 Senior Regional in North Falmouth, MA, allows for a large number of much smaller brackets. In each bracket the difference between the number of masterpoints on the most experienced team and that of the least experienced team is much smaller than in a traditional knockout. Moreover, every team plays in both of the first two sessions, and for each the probability of reaching the third session (and thereby participating in the overall awards) is much higher.

The format for the five-way Round Robin is a little unusual. Each team plays the other four teams over the course of the first two sessions. Many different schedules are possible. Here is one: 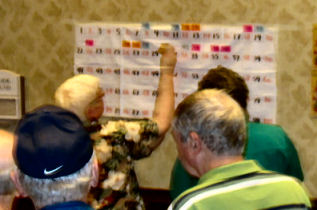 A captain needs height to see over the throngs looking for their assignments in the rack.

Mechanics: Assign one pair to be East-West and one to be North-South. It does not much matter which is which. Pick one player to be captain. The most important qualities in a captain are vision, height, and demeanor. In bracketed events when you buy your entry you will be required to fill out a card that has the captain's name and the total number of masterpoints that your team members have. You may instead be required to provide the ACBL number of each team member. Depending upon the type of event your first table will either be on your entry or displayed in a rack over your team number.

North-South goes to the table that was designated on the entry or the rack. In the first round the directors will announce the corresponding tables for the East-West teams. Ordinarily if North-South is at table B7, East-West will be at table A7. If your are in a three-way, which is not uncommon in the first two rounds of a knockout, the directors will explain where the East-West teams should go.

In District 25 almost all team games are currently shuffle-and-deal. So, unless directors have directed you not to do so, you will need to shuffle the cards that you find on your table before you play them. Important exceptions: In a three-way, the boards are shuffled for the first half of the match but NOT the second. The East-West teams bring the boards that they used for the first half of the match to their teammates. These boards are NOT to be shuffled. They are to be played as they are. Similarly, in a five-way, the boards are shuffled only at the beginning of each session.

In a head-to-head match you should call for a caddy when you have finished the set of boards that was on the table. Do NOT bring the boards to the other table. Similarly, if you need a board or two from your teammates' table, ask the caddy to bring it.

When a caddy brings you boards, always make sure that they are the ones that you were expecting. If you have already played boards 7-12 in a compact knockout, you expect to receive boards 1-6 from the other table. It is conceivable that you will receive a different set, but you should make sure that the boards that you are about to play have already been played by your teammates.

Needless to say, you should always be courteous to the caddies. If you are tempted to be rude, just think of what they could probably do to your phone in thirty seconds.

In a knockout, you will compare scores with your teammates after you have played half of a match. You will then return to the table at which you began, verify the score with the opponents, shuffle, deal, and play the second half of the match.

At the end of the match validate the score with the opponents. In a Swiss or Round Robin the captain of the winning team then fills out a result card and turns it in. In either type of knockout, results are given verbally to the director.

The most common form of scoring in team games is International Matchpoints, which are almost always called IMPs. Most players use a special kind of score sheet that is available at one of the tables near the table at which the entries are sold. It looks like this: 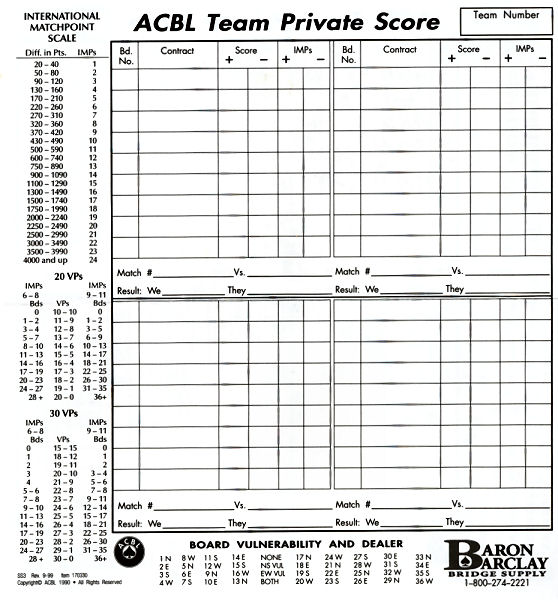 Write the board number in the appropriate column. Then record the contract as usual and the score in the appropriate column: + (positive for you) or - (positive for the opponents). If you are uncertain about the vulnerability, you can check the table at the bottom of the score sheet. Some people have trouble reading this table; an alternative is to look at a score sheet used for pairs games. Don't write anything yet in the last two columns. They will be filled in when you compare scores with your teammates. 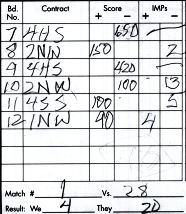 When all of the boards have been played, the East-West team goes to the table of the North-South team to compare results. At the right is the score sheet for an East-West player from a six-round match that included boards 7 through 12.

On board 8 East-West bid 2NT and made three for 150. However, at the other table the East-West team bid 3♥ and made five for 200 points. So, the opponents won the board by 50 points. Use the table at the top left of the score sheet to translate that into IMPs. The second line (50 - 80) is the appropriate one. So, you need to write a 2 in the - column under IMPs. Score all six boards and record the totals at the bottom. 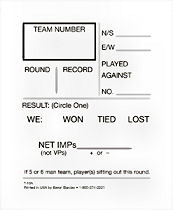 If you won the match, make sure that the opponents agree with you. If you are playing in a knockout, just tell the director that you won. He/she will want money for the next match. In the first match of compact knockouts the directors will sometimes provide cards with instructions explaining what to do if you won or lost the match. If not, report the results and ask for instructions.

At the conclusion of a Swiss or Round Robin match fill out a card like the one at right. A supply of them should be on every table. If you cannot find one, steal one from another table. The important information is your team number, the opponent's team number, whether you won or lost, and the margin of victory in IMPs. Ask the opponents to initial the card and then take it to the director. Try not to gloat!

I hope that you made it this far.

Be sure to try at least team events. I can just about guarantee that you will have fun. And here is another bonus: since you play against the same pair for more than just two or three hands, it is an outstanding way to make new friends in the New England bridge community.