The New England Bridge Conference, or NEBC, is a member of the American Contract Bridge League, better known as the ACBL. The ACBL has approximately 140,000 dues-paying members. Anybody can join. The ACBL is divided into 25 geographic Districts. The NEBC is District 25 and is comprised of the six New England states. It has more than 7,000 members, which makes it the seventh largest district.

Each district is divided into geographical Units. District 25 has eight units: Maine, Vermont, New Hampshire, Connecticut, Rhode Island, Eastern Massachusetts, Central Massachusetts, and Western Massachusetts. Some players use acronyms for these bridge associations: MBA, VBA, NHBA, CBA, RIBA, EMBA, CMBA, WMBA. Each unit is also known by its ACBL number. The "Unit Websites" tab at left contains links to the websites of each unit. Here is a snapshot of the membership by unit as of March 2022:

The ACBL sanctions bridge clubs across the United States, Canada, and Mexico. It also sanctions duplicate contract bridge tournaments at three levels: Sectionals, Regionals, and Nationals (which actually cover all of North America). All ACBL-sanctioned games award "masterpoints" to the players with the best scores. Each year the ACBL runs three eleven-day national tournaments in cities throughout the continent. The locations change from year to year. Events at other bridge tournaments can last from a few hours up to seven days.

Anyone can become a member of the ACBL; a member's District and Unit are determined by his/her address. Games are open to anyone, but masterpoints are awarded only to members. Members also receive the monthly Bridge Bulletin magazine and various other perks. Details are available at the ACBL website.

Regional bridge tournaments are held at various hotels that feature suitable facilities such as exhibition halls, ballrooms, and conference rooms. Before the tournament these rooms are filled with bridge tables, and the directors, caddies, and tournament organizers add the necessary accoutrements. All of the tournaments are non-smoking. The photo below, which was taken at the Hyannis tournament in April 2011, shows a typical regional event: 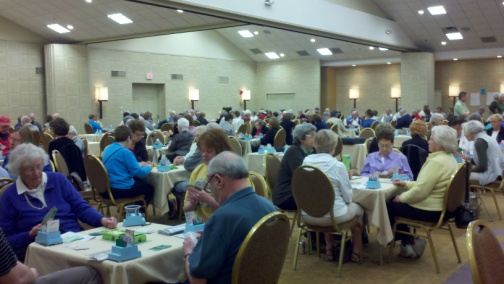 The events are run by certified professional directors. Occasionally players will need help with a ruling, and an authoritative and unflappable person will arrive at the table to provide guidance. From time to time caddies will roam the playing area to gather entry forms, distribute vouchers and other information, and move boards. In most events players will face new opponents a few times per hour. A session lasts about three and a half hours. Some people play three sessions in a day, but most limit themselves to only two or even one. Water is always available, as well as a table with pencils and score cards. Outside the playing areas are restrooms, a partnership desk, a bookseller's table (usually), a snack bar, candy and other hospitality, and literature such as the tournament bulletin and flyers promoting future tournaments.

Onlookers, called kibitzers, are welcome. If the players do not object, anyone can pull up a chair and silently observe the cards of one player and the actions of all.

The duplicate boards are usually predealt by a computerized machine that employs hands created by a random number generator on a computer at the ACBL. Instead of making their bids alout, the players use bidding boxes. So the room is rather quiet during play. The results are entered on scoring slips, or entered into hand-held devices (called electronic scorepads or BridgeMates)  that transmit them to the director's computer. At the end of the session scores are promptly posted, and hand records that show the details of the predealt hands for the pairs games are provided for analysis and discussion. Both the hand records and the results are also available on this website, typically by early the next morning. Results can be viewed by clicking on the "Tournament Results" tab on the menu displayed on the left side of each page. Results are also emailed to recipients.

The entry fee for each regional event is currently $15 per person per session, which is considered a bargain by most players. The charge covers the cost of the game as well as the coffee, tea, and snacks that are provided on most mornings. Regional tournaments in New England are awesome events. They provide an opportunity for the regulars to visit with long-time friends from other areas of New England (and beyond) and for all players to make new friends. They also offer everyone the chance to rub shoulders with and even occasionally play against famous experts, including published bridge authors and many-time National champions.

The hallmark of the regional tournaments is friendliness. The long-time chairperson of the ACBL's Goodwill Committee, Sandy DeMartino, is a member of District 25 and frequently attends the tournaments. New players soon learn that nearly everyone involved is not only willing but eager to answer questions, whether about recording a passed-out hand on the scoring unit, the location of the nearest ladies' room, or the best approach to a difficult bidding problem.

Players often travel a good distance and stay for several days. The tournament manager negotiates with the host hotels reasonable room rates that are available only to players. There are always numerous restaraunts nearby. Some of the venues are resorts that feature golf courses, beach access, and other amenities.

In most years the district sponsors the following eight tournaments:

* Not schedduled in 2022. The four-day Gala Regional is scheduled for May.

Click on the "Calendar" tab at left for details.

Sanctioned tournaments always offer masterpoints, but there are no cash prizes. The only exceptions are the Grand National Teams and North American Pairs, for which the district provides a partial subsidy to the winners to enable them to represent District 25 in those events at the national tournaments.

Masterpoints are recorded and stored on the computers at the ACBL headquarters. They represent the accumulated success over the lifetime of each member. Most players take them very seriously. The ACBL has established categories of masterpoints. A snapshot of our membership in March of 2022 shows the following distribution:

This website recognizes the achievements of players in several ways. Each month it lists the names of players who have reached a new rank. Each quarter the standings in various masterpoint races are updated. If a player achieves something exceptional at a National tournament, the page accessible from the "District Director's Report" tab will mention it. Players who do well at a Regional tournament can see their names on the "Tournament Results" page of this site.

Bridge is definitely alive and well in New England. District 25 invites players of all levels to come play with us. The game of duplicate contract bridge provides endless intellectual fascination, and it is FUN.

The design of this site is compatible with mobile device operating systems on smart phones, including Windows, Android, and WebOS. If you find any errors or have suggestions, please send an e-mail to webmaster@nebridge.org. A prompt response will be forthcoming.