Regional tournaments are sponsored by District 25. They differ in several ways from the sectional tournaments that are run by the various units.* Regionals are longer, five or six days. The venue is usually a large hotel with capacious playing areas and a location that features many good restaurants. Die-hards play every day, but some people only come for a day or two. Volunteers at the Welcome Table will help everyone who is not familiar with the venue, the area, or the format. You can even pick up a sticker there for your convention card. 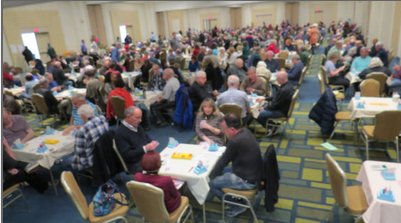 The main events are usually held in huge ballrooms with (gasp) tablecloths.

New England's regional tournaments usually schedule three sessions per day: 10:00, 2:30, and 7:30. In the first two sessions several events are run simultaneously. On most days both pairs games and team games are scheduled. If you are unfamiliar with the mechanics of team games, This article can introduce you to the subject.

Many events are “flighted” or “bracketed.” This allows players to compete against others with similar experience. This article, which uses the 2017 tournament in Cromwell for its examples, explains how this works in New England. Gold Rush events (under 750 masterpoints) and single-session pairs games for 299ers (under 300 points) are usually scheduled for nearly every day. Of course, you can enter open events if you want to test your mettle against New England's best.

New England is becoming famous for its Monster Knockouts. These are held during the daylight sessions on Saturday and Sunday. This bracketed competition draws large numbers of players at all levels. The players of the bottom bracket generally face no team with more than 1,000 points (250 per player), and the winners are rewarded handsomely with gold and red points. 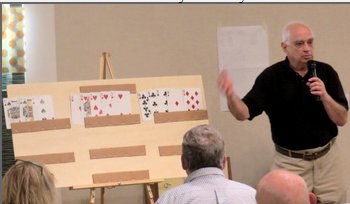 Stephen Rzewski gave a free lecture on hand evaluation at the Senior Regional in North Falmouth.

The evening pairs games – and a few others – are, beginning in 2017, part of a Super Point series that awards more points for the same entry fee. In the first two regionals that employed the new format a young man garnered 26.91 gold points in just this event!

Regional games are great fun and a great way to make new friends. District 25 has zero tolerance of abusive behavior. The long-time I/N director, Susan Miguel, makes everyone feel comfortable in the 299er and Gold Rush games. She also helps newer players locate partners and teammates. She can be reached at inchair@nebridge.org.

Regional tournaments are also a great way to learn. A panel of experts discusses the hands played in one of the morning session during the lunch break. A lecture is scheduled preceding play on one of the days. Both of these are free of charge. 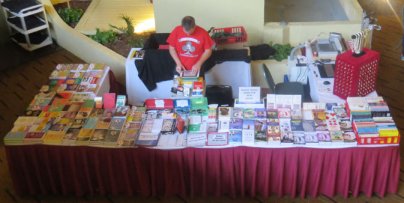 At most regional tournaments you can also purchase bridge books and equipment from a vendor who sets up shop in one of the hallways. You might also find other items of interest on sale.

* There are eight units in New England: Three in Massachusetts – Western Mass, Central Mass, and Eastern Mass – and one in each of the other five New England states.