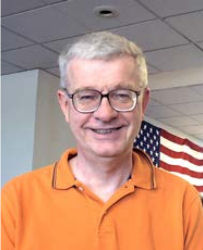 Many players in District 25 and throughout the country have experienced a feeling of foreboding when the tall, lanky, and quiet figure shown at the right took a seat at their table. He is John Stiefel, the four-time national champion and Grand Life Master. For decades he has been a dominant figure in tournaments throughout New England, racking up nearly 20,000 masterpoints.

John's articles, which were originally printed in the Kibitzer, the newsletter of Unit 126, usually focus on a topic that is often neglected in the literature, the play that gives up nothing to the opponent but has the potential – however slight – for generating that one needed trick. He calls it the “can’t cost” method. His first offering can be read here.

Chapter 2 of the CC Principle is here.