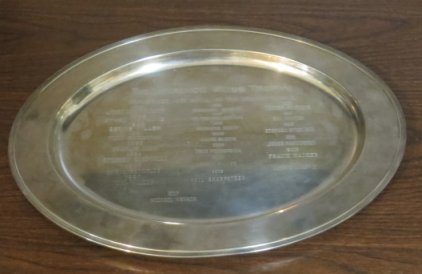 The New England Bridge Conference (NEBC), the ACBL's District 25, periodically awards the Larry Weiss Trophy. In The Bridge World magazine, the late Edgar Kaplan once said the late Larry Weiss was "the first gentleman of bridge." When Weiss, a longtime New England expert, died, his brother Stephen Weiss of Special Projects, the Alfred P. Sloan Foundation in New York, donated the trophy, which is inscribed, "For Grace and Skill at the Bridge Table."

1. Some degree of success in contract bridge during the year for which the award is made.
2. Some degree of association with New England bridge.
3. Notably, superior behavior and gracious presence at the bridge table.

Mr. Weiss left these determinations to the NEBC, which has normally delegated an awards committee to consider annual nominations for the Larry Weiss Trophy by NEBC members. Past practice is that the last Larry Weiss winner is responsible for establishing a procedure to select a new winner. It would seem to make sense for the committee selecting the current nominee to include the current winner plus one representative from each of the Units, with a preference being given to former winners of the trophy. This would provide for nine voting members on the selection committee with at least five votes being needed to select a winner.

Anyone submitting a candidate's name for consideration should present a rationale in support of the person, which would include their contributions to bridge, especially in the form of volunteerism, as mentioned above.

Announcement of the Award

This is clearly a very prestigious award which should be given considerable publicity. Consideration should be given to announcing the award at the Sunday Swiss following the delegates' meeting when the award is made, sending an article regarding the award winner to the recipient's Unit publication, and posting on the District website.

Daily Bulletins for subsequent regionals should carry announcements for the latest winner and requests for nominations for future candidates.

In some years, no award has been made. Recipients have included: