At the beginning of every month District 25's Director, Rich DeMartino sends out congratulatory e-mails to New England bridge players who have advanced in rank during the previous month. Some of them respond, and Rich selects a few of the most interesting ones to be posted on NEBridge.org. Below are some of his favorites from November of 2015. 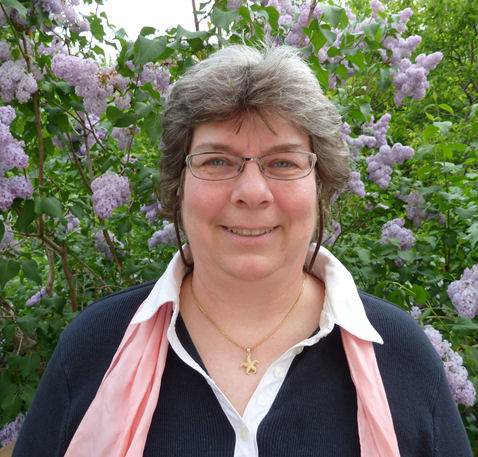 I am very grateful to the group in Middlebury, Vermont where I first started learning to play bridge about two years ago; there are so many kinds and ways to play this game. I am also very grateful to the two clubs in Williston and Rutland for their support, instruction and encouragement. What has kept me going even when I am at the bottom of the pack is my mentor, Gerrie Willis. I needed to play with someone who was better than I was and had the patience and kindness to be left with a thirty-point hand in a two-level contract because I passed, at a game contract when I had six points and we went down three and so on. I needed someone who would not yell or shame me so that in the morning we could be at the bottom of the group and in the afternoon we would win first with a 67% score. What has helped me and keeps me going is getting to play in a consistent way with kind people. This game offers a life time of learning and I am very excited to have reached this little step on this long journey. Keep playing is the best way to learn and remember to have fun.

Since I have moved up five levels in the last year, I found it a bit funny to get the same email every other month congratulating me. But I do acknowledge that you have lots of folks that you must send the email to and cannot possibly compare the lists of names.

I write to acknowledge the great feeling that your wife gave me. Although I have played on-line for 10 years, this past year was the first year that I played face-to-face bridge. There is a great deal to learn moving from on-line bridge to face-to-face bridge. To say that I am shy is an understatement; I have Aspergers and am uncomfortable dealing with people. I will never forget how your wife introduced herself to me, a nobody, who was lost and made me feel more comfortable. Please thank her for me. I did not get the chance.

Again, thank you for your service. Please thank your wife for her kindness towards me. I can honestly state that she convinced me to continue to play face-to-face, and I am forever grateful.

Like many others, my first experience with bridge and coffee began in college. In the coffee spa, one could find students willing to play a game of bridge in between and after classes. My fascination with the game was a significant factor in me leaving school in my sophomore year. After a two-year stint with the U.S. Army I returned to college, where I played both social bridge and dabbled in duplicate with both with my dad and fellow students. After graduating most of my bridge activity was confined to “train” bridge while commuting to New York City. Upon retirement I found a strong need for mental stimulation, therefore I started to play duplicate seriously. I quickly found that the game had changed considerably in the years since I first started.

When my wife of over 40 years passed away eight years ago the game became quite important to me. It put me in contact with many others my age. This socialization helped fill my leisure hours. When not playing bridge, I like to cook. My specialty is soup, which I give to a number of the bridge players. Some call me the “soup man”, while fans of the Seinfeld TV show affectionately tag me with the title of “Soup Nazi”. Either way, it gives me pleasure when they say that they enjoy my efforts.

As my master points accumulated from 50 to 100 plus, the quest for “life master” status began in earnest. While I have read about the conventions I had never heard of five to ten years prior, strong partners and opponents have been a major part of my bridge education. To name just a few, I have found that the really solid players such as Bill Wood, Morris Feinson and Gloria Sieron have been both knowledgeable and patient. Such individuals have been important contributors to any improvement I may have shown.

While it was open I played and enjoyed the club game in Norwalk. Currently, I play multiple times a week at the Fairfield Bridge and the Newtown Bridge clubs. Both are quite good. I have been to the regional game in Cromwell, Rye Brook NY, and Danbury several times. I have been to other regional games run at other Crowne Plaza Hotels (Fairfield NJ, and Warwick RI), and all the games were run quite well. From time to time I plan to attend other regionals, because, all the hotels’ facilities were quite nice and the competition challenging.

Unfortunately, I cannot say the same for the sectional games, especially in Hamden. The times I have been there the games were run fine, but the facility is unacceptable and I do not plan on going again unless the venue is changed. Rich DeMartino’s recent lecture at the Newtown club was interesting and informative. Gauging by the capacity attendance and the Q&A session many others were similarly impressed. Periodic presentations by various experts would likely be well received in this area.

This year has been a rough year for me; Jesse Whittemore, my husband of 43 years, passed away on March 22, 2015. He was my bridge partner for all bridge tournaments. I did have to scrounge around to find partners for this Danbury tournament. Fortunately, I found agreeable partners that were very compatible with the way I play.

So, winning the Gold Points to enable me to become Life Master status is the best event that happened to me this year and probably the high-light of my bridge career.

After a brief foray into a few duplicate sessions back in 2010, I started playing duplicate in November 2013.  I was blessed with a really good partner — a dazzling and sharp gal who also happens to be my mother, Ann. Though both new to duplicate, we were longtime players and students of the game. She and her mother had taught me the game as a teenager, and over the years we would routinely exchange interesting hands, bridge columns, and the occasional book at Christmas.

In early 2015 Ann and I decided to travel to New Orleans to spend a few days playing at the Spring NABC. It was a fantastic experience! We had a great time and played pretty well also — in six sessions of the 299 game, we were overall winners three times and flight winners twice.  The 15+ points we earned there pushed me just over the century mark.

In just under 2 years of playing duplicate, I've played in seven states with 31 different partners!  I'm looking forward to continuing to play and develop my game.

Yes, it feels like a memorable achievement since, as we get older, there are fewer and fewer activities that become measurable. On a side note, it is very amusing how non-bridge friends and family react to the title "Life Master"; it has a certain awe-inspiring sound to it, far beyond the reality of not really being "Masters of Life" but rather just dedicated to enjoying the game of bridge and trying to improve over time. To the broader questions you raise, I get the sense that the ACBL is performing well; examples include the "Instant Results" on-line e-mail directly after tournaments, a snazzier Bulletin, and a perception that they are working hard and willing to try everything. Two great motivators remain the running "Points to go" printout on the backpage of the monthly Bulletin, and the importance of having a "home" Club where the social aspect of bridge is best nurtured and victories celebrated. 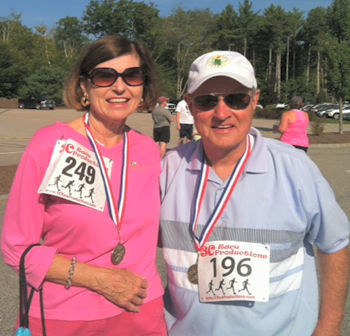 Like many in my generation I learned to play bridge from my parents who played social contract and duplicate bridge throughout their adult lives. They taught me and my fiance, now my wife for 48+ years, to play bridge and we've enjoyed the game ever since. I earned my first ACBL masterpoints playing in a club game with my Dad.

I owe all my success to the many partners I've had over the years who have all taught me so much about bridge and life. I can't mention them all but I must note two partners in particular. First and foremost I note my wife Mary Ruth with whom I have enjoyed many hours of bridge for over 50 years! We've played social bridge, couples duplicate, dinner duplicate and ACBL games over the years. She has patiently "put up" with my competitiveness and has tolerantly allowed me to play with many others. Secondly I'd like to recognize Richard Burns (1927-2015) with whom I made Life Master nearly 25 years ago and with whom I enjoyed many club, sectional, regional and world-wide bridge pair successes. 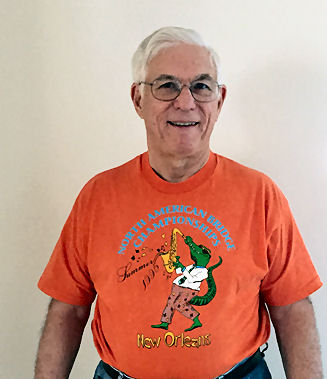 Jim Negro, modeling the shirt he bought at the New Orleans NABC, in which he represented District 25 in the Grand National Teams..

Bridge is a great game. I enjoy it immensely for the mental challenge it provides and the many friends I've met.

The bridge experience has very much improved over the years. I find today's games more friendly (i.e. less contentious with cranky or obnoxious players). The ACBL has made great strides with the "Zero Tolerance" policy, friendlier directors, and tournaments which better cater to the core of ACBL memberships. When we realize that only about 5% of the ACBL membership is ranked Gold Life Master or higher, then it's important that tournaments cater to the less experienced players through programs like the I/N and Gold Rush. [Though I do think these players miss the experience we all had in the "good ole days" when you went to a regional tournament and played against the 'name' players whose accomplishments were often written up in the bulletin.] The "B's Needs" and Tournament Lecture programs are useful in encouraging the less experienced players.

Perhaps the biggest 'fear' that we have is that the game is dying out and our membership age keeps creeping upward. So there's some obligation on all of us to encourage new people to join the game and to make it a worthwhile experience for them. So I applaud the ACBL efforts with youthbridge. Perhaps one draw is the educational benefit of the ACBL, especially the BULLETIN, and the experience gained in playing against more experience competitors. My number one comment is to keep on trying new things and seeing what is successful in attracting new players to bridge.